Want to know what it looks like when your child decides to get all of his molars in plus a couple more teeth all at the same time? 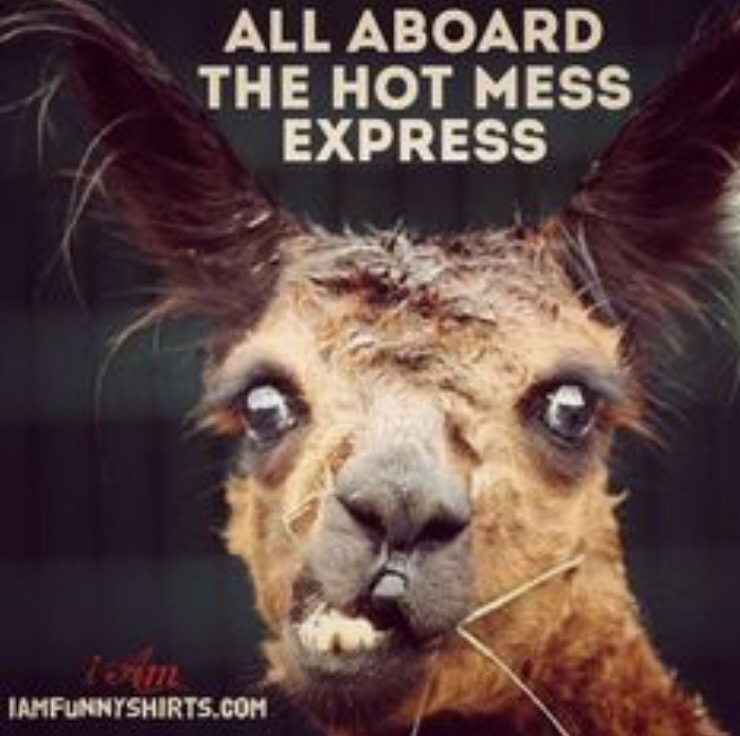 Yup. That’s me. You can’t recognize me because of the lack of sleep but I promise that’s what I look like right now.

So I thought it would be fun to update on all things Caleb since he WON’T STOP GROWING. I mean my goodness, the kid is getting big. Last week I noticed some of his clothes were becoming a bit small and his sweater looked a bit like a midriff. Whoops. Not the look we are going for. So I packed up all his 24 month size clothes and officially committed to 2T. SIGH. He no longer wears clothes that has months in the size. We have officially entered toddler land. (And I cannot even express how thankful we are for grandparents that buy him clothes and for a friend with twin boys that gives us their hand me downs.) 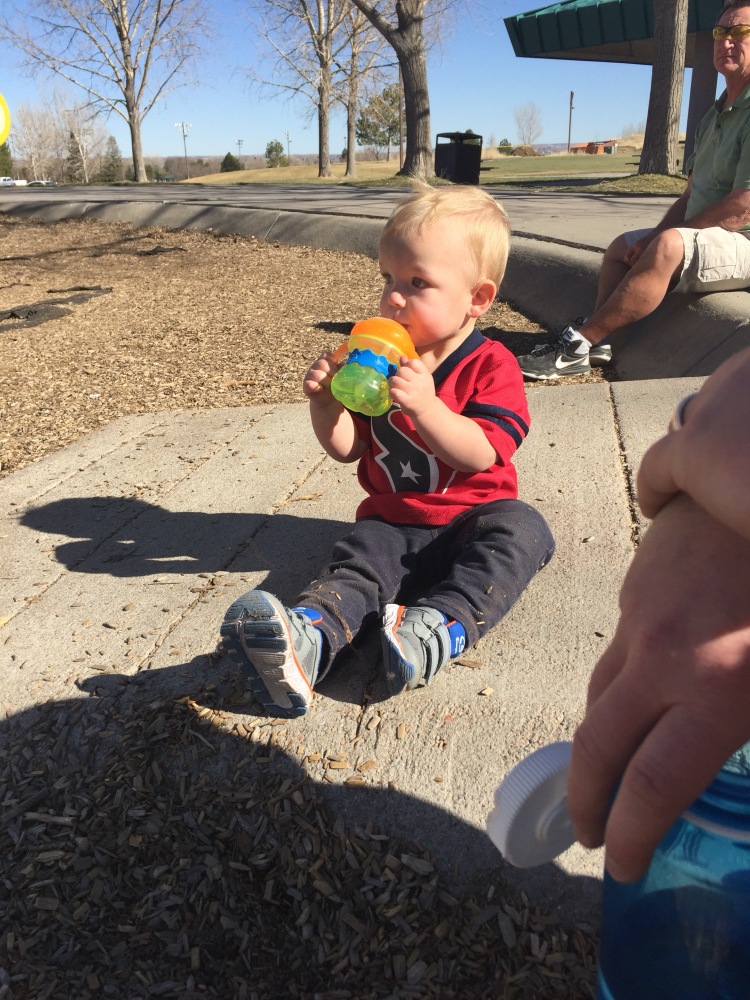 Speaking of entering toddler land, he so badly wants to be a big kid. He loves watching the teenagers play in the gym at church and usually he’s right in the thick of them. He’s even starting to actually dribble the ball when he’s holding a real basketball. The kid knows exactly where that ball closet is and he will cry real tears if it is locked. (Looks like the terrible twos might be headed our way.) He also can fiercely throw a ball which is apparently awesome that he already has a ‘great arm’, but is not great if you happen to be looking away. I’ve become a pro at getting pegged in the head.

He is still not all about speaking words, but he does say car and ball constantly. Probably because they are his favorite toys. He will also say please, mama, dada, and Jesus consistently. Usually if you ask him to say a word, he will try his best to repeat it back to you but I’m not counting all of those words just yet. 😉 One of his favorite things right now is telling you what sound each animal makes. The one that makes me laugh the most is the sheep because it pretty much sounds like an attack sheep because he screams BAA!! Don’t want to run into that sheep in a back alley.

Nick’s mom sent us this picture yesterday. How hilarious, right?? And so true.

Cars are the best thing ever in his book. He likes pointing them out while we are driving, loves pushing around his toy cars while saying ‘vrooom’, and will even have them drive all over his body or ours. Aren’t we all just highways anyway?

He LOVES to read. And that makes this mama oh so very happy. He still has a soft spot for his favorite book Doggy Dog but lately he’s really loved himself a good flap book. (For those not in the kid world, that just means a book that has flaps that he can pull up and there’s something hiding underneath it.) Usually in the morning and after nap time, he will request books be given to him in his crib and he will happily ‘read’ in there alone for a bit. Kindred spirits, me and him. 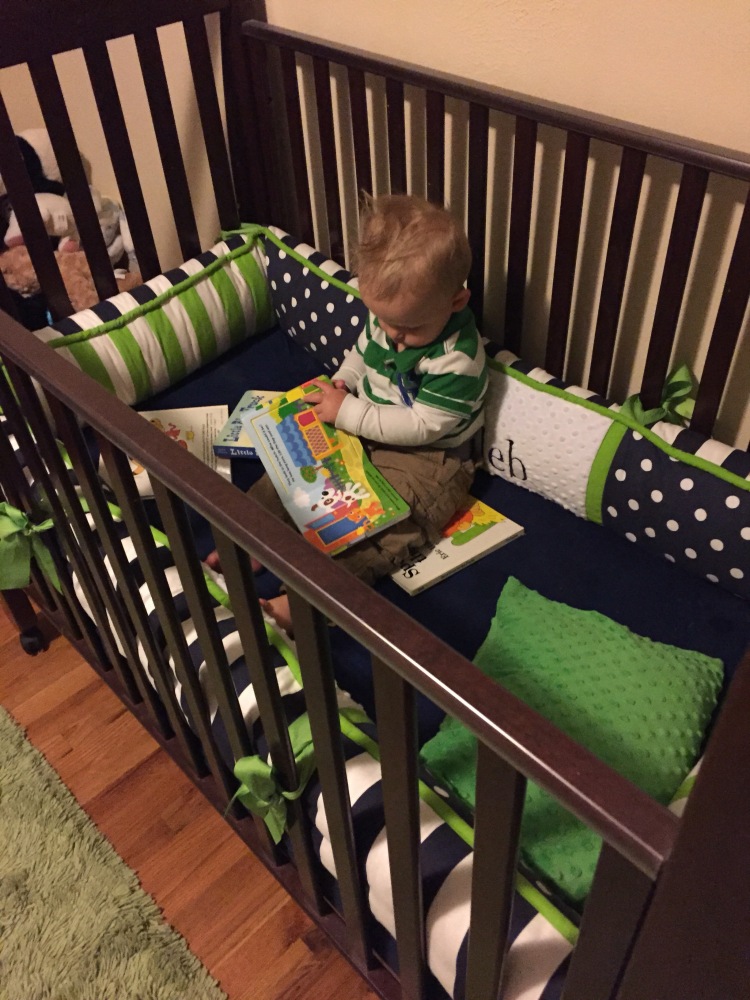 Caleb would live outside if we would let him. He is obsessed with getting to be outdoors. Catch him in the middle of a meltdown with ‘Wanna go outside?’ and he will quickly stop the tears, smile, and say ‘psssss.’ (That’s Caleb for please.) The playground is his jam. He either wants to stand there in awe of the big kids playing or join right in attempting to be big. I’m pretty confident he would stay there forever if we let him.

Nick is going to just LOVE this part but Caleb also really loves jewelry. If I have any kind of jewelry on at all (and if you know me, you know that I do), he totally wants in on that action. He thinks bracelets are hilarious as he tries to balance them on his feet while he is sitting. Necklaces are his favorite as he practices putting them on and taking them off. The other day, he found Nick’s name tag on a lanyard from church and it became his entertainment in the car.

And here he is just trying to put a strap around his neck. The guys loves a good ‘necklace.’ #sorrynick

Most of all, this kid is a lover. He loves to hug us, give kisses, blow kisses, just lay on us (or dogpile on Nick), and be snuggled. It makes my heart so happy. I would totally cuddle my sweet boy all day long. He is also still SUCH a flirt. We are definitely in big trouble.

So that is a bit of an update on all things Caleb. I’m sure there will be many many more to come!