Y’all. We were all about all of the Christmassy things this past weekend and I loved it. Caleb is to the age where he gets totally pumped about all of the things so it makes it so fun to share with him.

First up was a visit to Santa on Friday. We’ve done this every year he’s been born and it’s always a favorite. The first year he spit up on the big guy (being 2 months old and all), the second year he screamed in his face, and then last year he smiled so adorably. So we were excited to see what this year held! JoJo met us there which excited Caleb so much that he couldn’t decide which was more fun… seeing Santa or seeing JoJo! 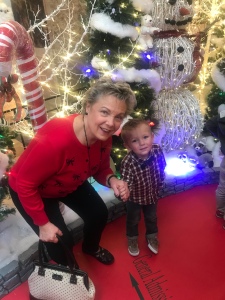 These genius people hand out glasses to keep the littles entertained while in line.

We tried to do all of the things to pass the time. Taking lots of pictures seemed to be our solution. 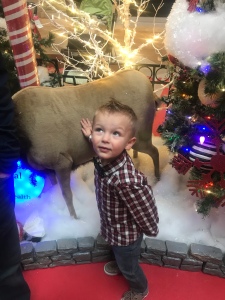 Caleb brought his Jett figurine from Super Wings to show Santa since he was asking for a Jett that transforms (or in Caleb’s words, ‘Jett what transforms’). Better educate Santa so he gets the right thing, I’m guessing. He was SO excited and sat right up on Santa’s lap. He did a great job of taking pictures and telling Santa what he wants. He even let Santa hold Jett and play with him. All of it was so great until we saw the picture… 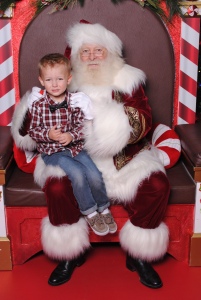 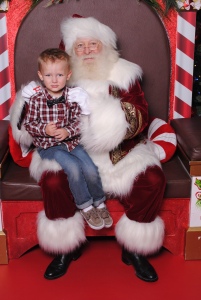 Neither him or Santa look like they’re having a great time. Even though they totally were! Too funny. Then the photographer insisted on a group shot. Because he clearly knew how to do his job (besides the above pictures clearly).

After Santa, we took a family pic and Nick did his best Caleb smile impersonation. These boys. Can’t take them anywhere.

We had lunch with JoJo and then headed to the mountains. We wanted to have a family day so we thought it would be fun to look around the shops in Idaho Springs and then have dinner at Beau Jo’s with their infamous mountain pies. 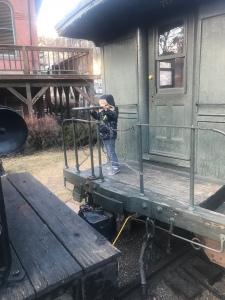 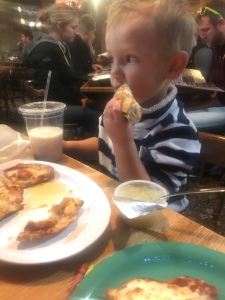 On Saturday, we had the student ministry volunteer Christmas Party. But major picture fail on that front. Then on Sunday, we had the Christmas Party that Caleb was BEYOND excited for. Our church did a Christmas Sing-Along that was super family friendly with kids in their Christmas jammies, fire pits for s’mores, hot cocoa bars, fun Christmas songs, Christmas movie clips, and snow! To say the kids had a blast would be a complete understatement. This event was a huge hit with everyone of all ages! 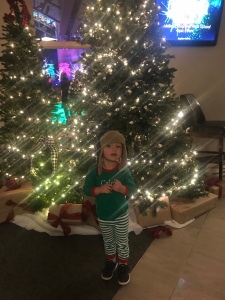 Caleb and his bestie Hava pretty much think they own the church. Which is fair since Hava’s parents both are church staff too. Church rats to the core. 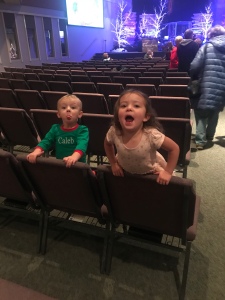 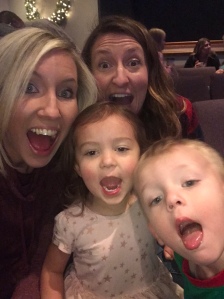 But give them some snacks and put that first Christmas movie clip on and they were all in. 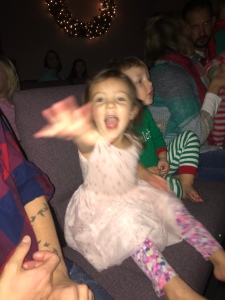 After the sing-along, Caleb and Hava had a blast on the stage steps. Because again with the thinking they own the place. 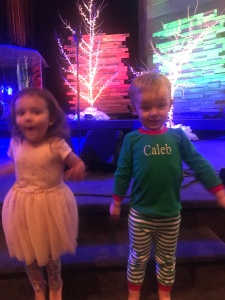 Then we headed outside so Caleb could roast his first marshmallow for s’mores. Which he kept calling mushrooms. I was about ready to find a mushroom for the kid because I was so confused about what he wanted until Heidi stepped in and suggested a marshmallow. Good thing because that’s for sure what he wanted. And he was a BIG fan. 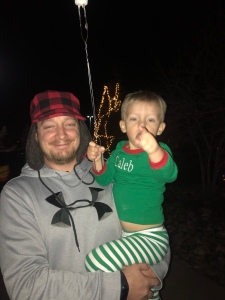 It was a such a great end to a festive weekend! I sure do love getting to experience Christmas through Caleb’s eyes!