One of my favorite type of blogs to read is a play by play of someone’s typical day. Just blame it on me being nosey. I’ve written one myself almost a year ago and I love being able to look back and see what life looked like then. So I figured it was time to do another one because obviously our little guy changes quickly and everyone says to cherish these days. So here I am cherishing. 🙂

Just like last year, I chose to document a Friday since I work part time and want to show kinda both parts of my life and I only work half the day on Fridays. So I documented Friday, March 10th because it was just a super normal day in the Jones home. Here we go.. a day in the life of me!

Rise and shine at 5 am. (And yes, I’m a bit of a snooze-a-holic.) Since I am so far from being considered a ‘morning person’, I figured out that I’m a better mom and just a better human all around if I am able to wake up before everyone and get some alone time. Believe me, my family benefits from this. 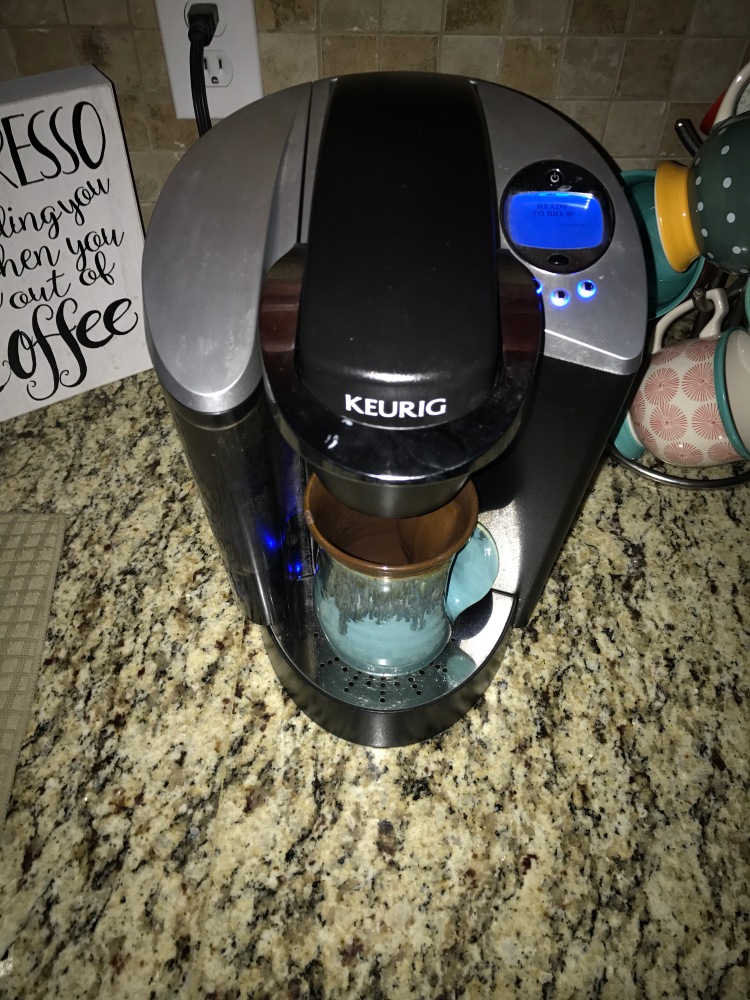 So I immediately hop into the shower so I can get to this spot as fast as I can. 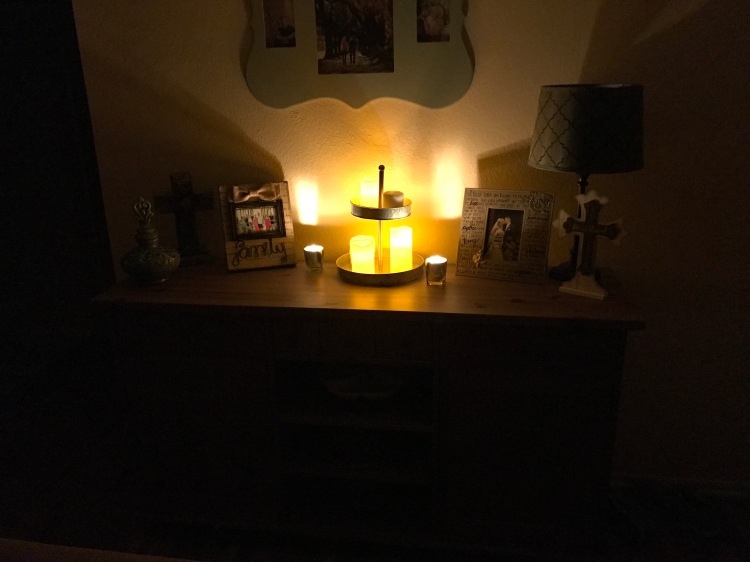 Since it is Lent, I am currently doing a bible study that focuses on this season and encourages having seven candles to symbolize the seven weeks until Easter weekend. And every week, you blow out a candle until they are all blown out on Good Friday to show the darkness that our world felt when Jesus Christ died on the cross. Then on Easter Sunday, you light all of them again because Christ has risen and our world is full of His light! So I absolutely love the idea of this but I also absolutely feel like I’m lighting a seance every morning since it feels like such a large amount of candles.

I sit down to do my study for the day.

With my new favorite mug that my boys gave me for Christmas. It has a little ‘pocket’ to rest your hand in. Straight genius. I finish my study for the day and read some of my favorite blogs and finish just in time…

Because this little guy wakes up! This is his ‘It’s too bright’ face. But then he remembered that he put all of his friends to sleep on the floor so he instantly inquires if they are awake yet. 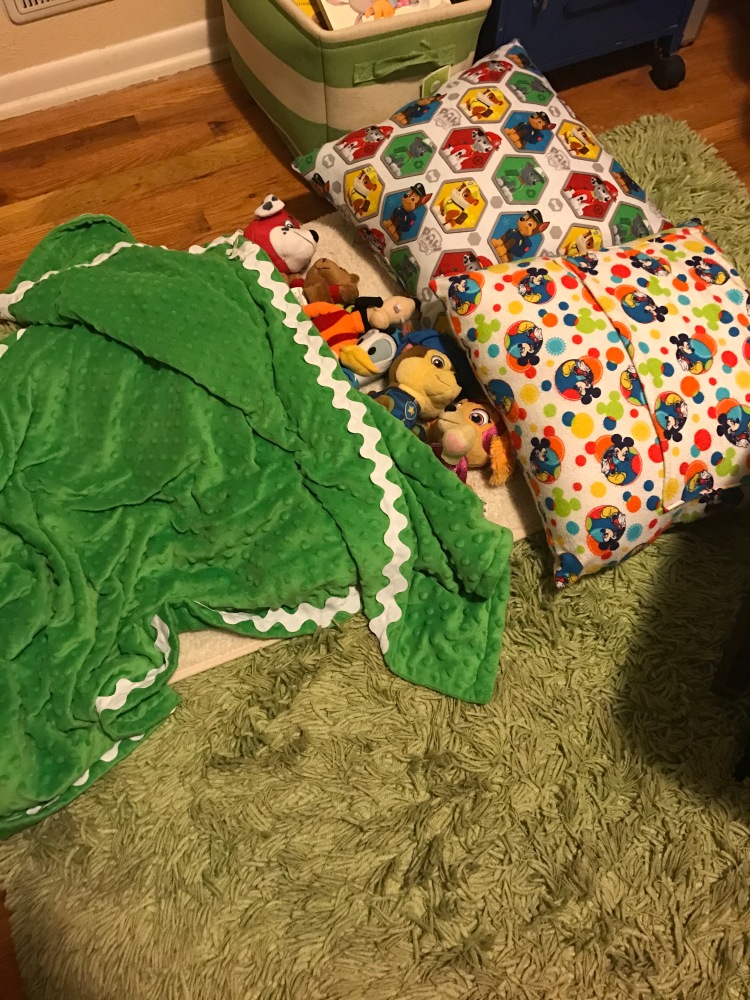 After he tells me to wake them up, he asks that they all join him in his bed.. 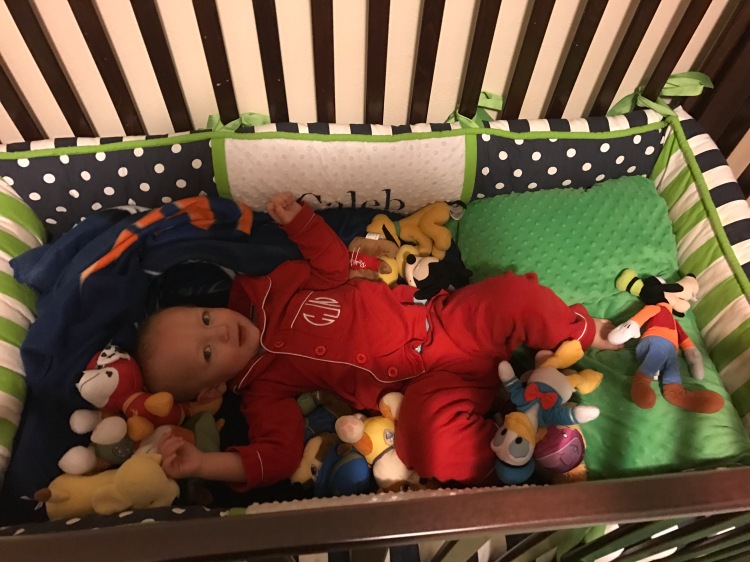 He is awake, laughing, and being silly! It’s safe to say that he got his morning happiness from his daddy.

He decides ALL of his friends should watch his morning show with him so here they all sit. He finds this all very fantastic and hilarious.

He decides that for a second he should snuggle in my lap. No complaints here.

Then it’s breakfast time. He enjoys his cereal bar and milk on the couch with his show while I cook mine. Eggs and Raisin Bran are what’s for breakfast. I have recently become obsessed with Raisin Bran. I have never been a cereal person in my life but now I can’t get enough of this. 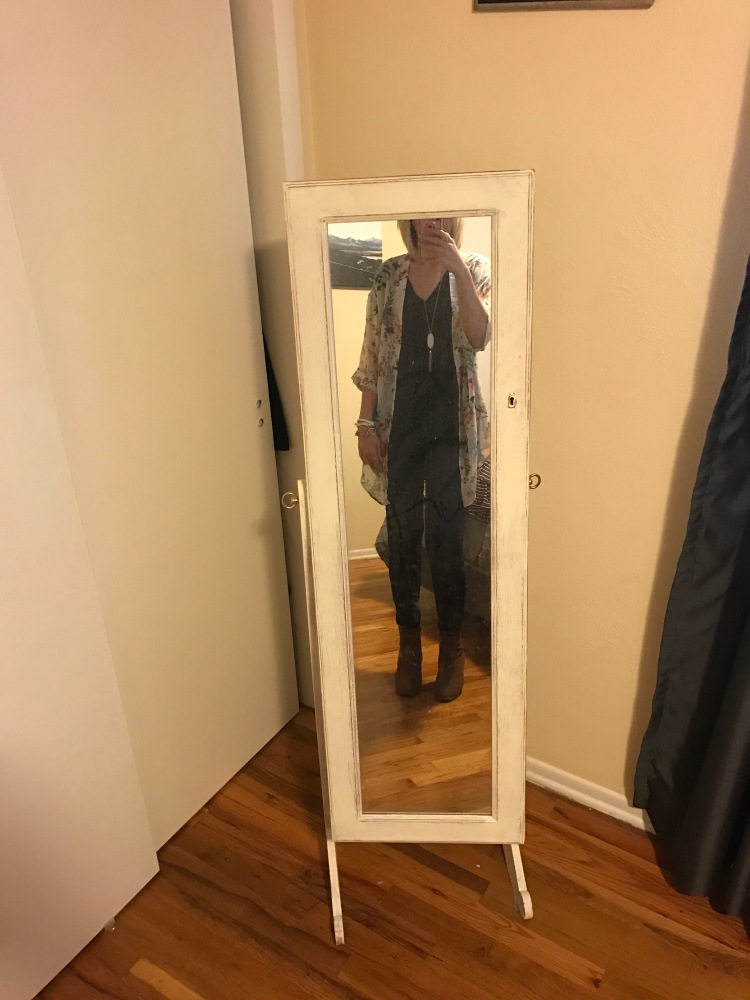 Time for me to get dressed and get out the door. A shameless selfie only because of this post.

I run into this guy in the hallway with ‘Digger.’

He requests a quick picture together. Or maybe I did. Hard to tell. 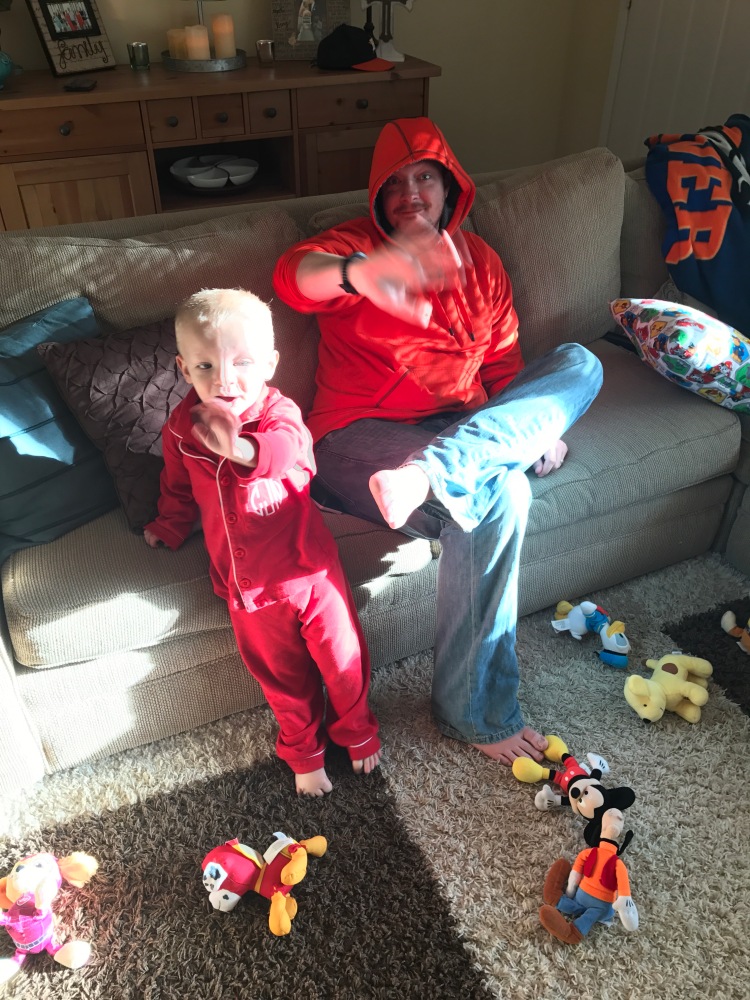 I tell these two crazies good-bye. Friday mornings are their boy time together. And they go to story time EVERY week. It’s pretty much the most precious thing ever. 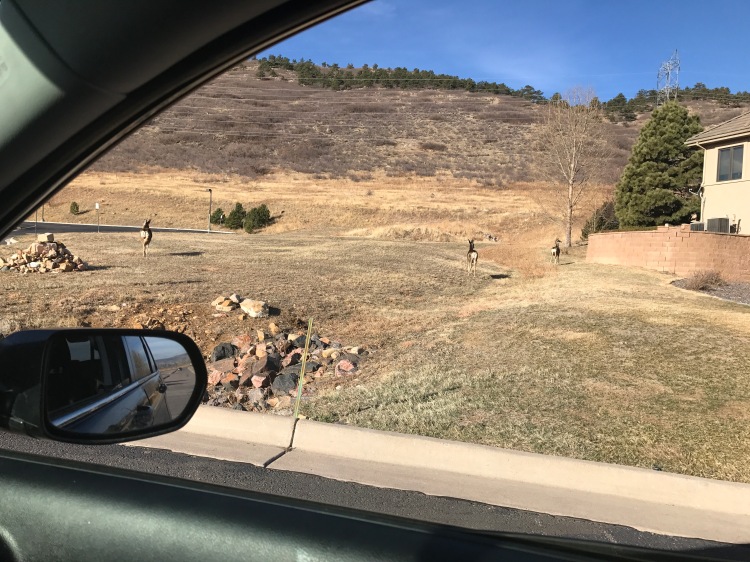 As I drive into work, I have to stop to let some animal friends pass by.  No big deal.

Time for round two.

Two different people brought donuts to work so the temptation was real. Mid-morning snack for the win.

Nick sends me this picture of our little munchkin at story time. Can you spot the kid with the hat on? Because he’s all about following daddy’s legacy in the always wearing a hat department. 😉

I work until noon on Fridays and then it’s time to head home..

..with an astronaut outfit for my husband to try on. No big deal. These are the kinds of things that happen when VBS season is upon us.

I arrive home to this. When mommy is away, daddy and Caleb will destroy the house.. I mean, play.

Caleb is napping and Nick is in the basement working out so I make my lunch. Leftover BBQ chicken and cucumbers & hummus is what I choose. I actually work on my ‘Friday Favorites’ blog while I eat and enjoy the silence.

When Nick comes upstairs, we start watching his new favorite obsession. Diners, Drive-Ins, and Dives. When we met, Nick didn’t watch cooking shows. But I may or may not have converted him and now he probably watches them more than me. (And likes to impersonate them in the kitchen.) 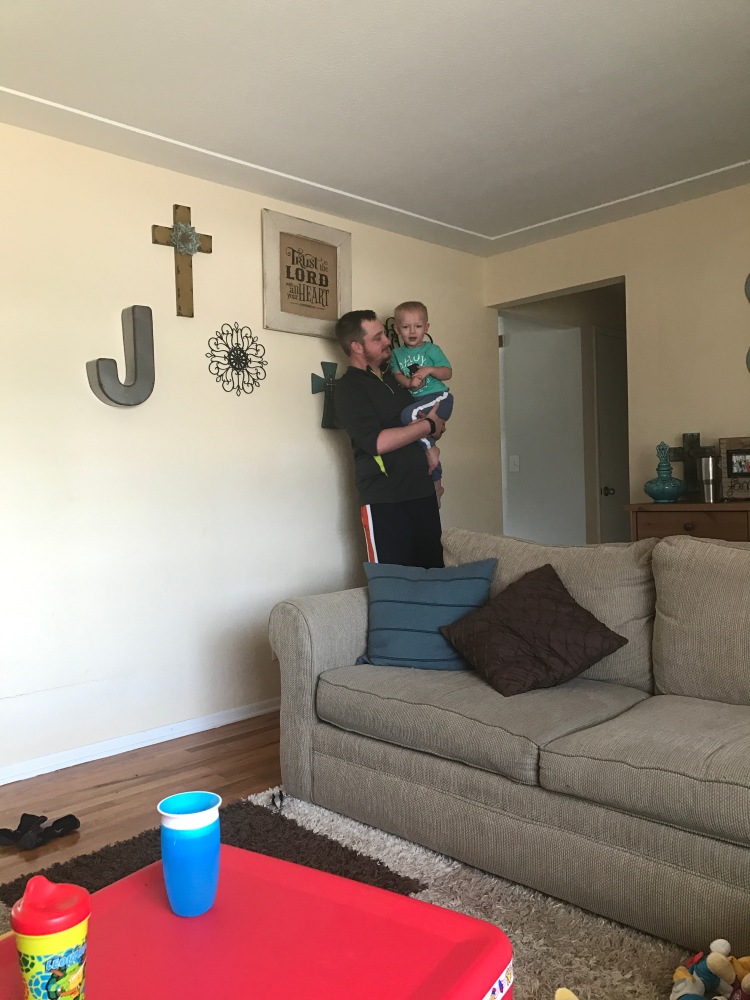 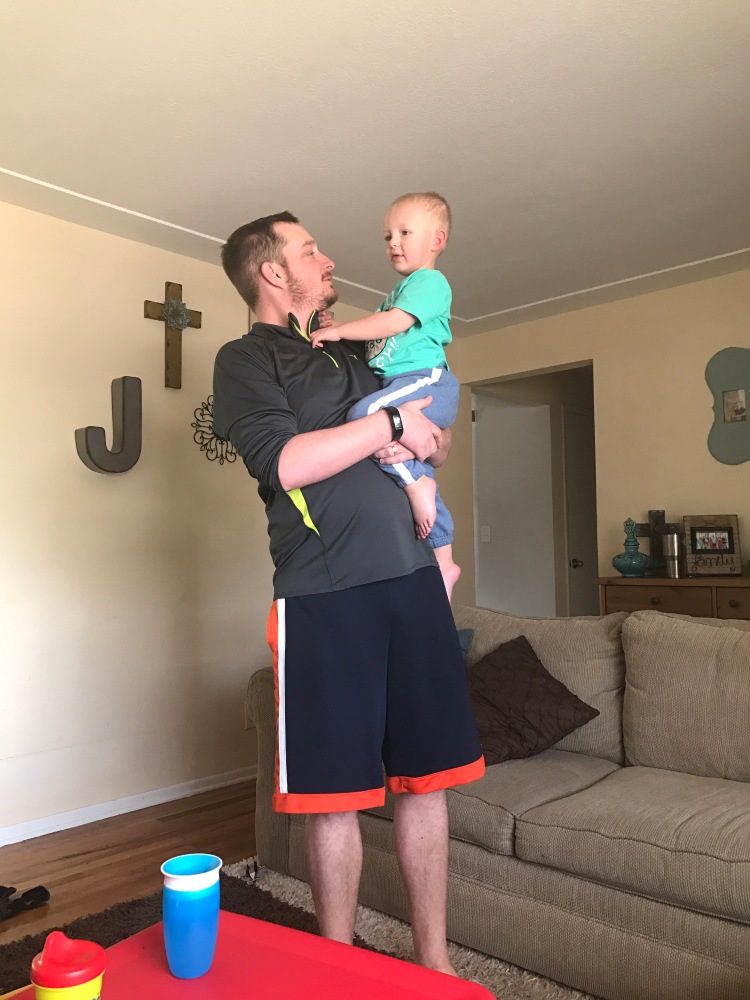 And immediately distracted by ‘Daddy’s show.’ I think he loves it almost as much as Nick. He always points to the tv and asks ”This guy called?’ (which is how he asks for someone’s name) but the host’s name is Guy. So the convo goes a little like this:

Caleb: No, daddy. This guy CALLED?

Nick: His name is Guy.

Caleb: No, daddy. This guy CALLED?

Nick (gives up and tells the guy’s last name): Fiere. 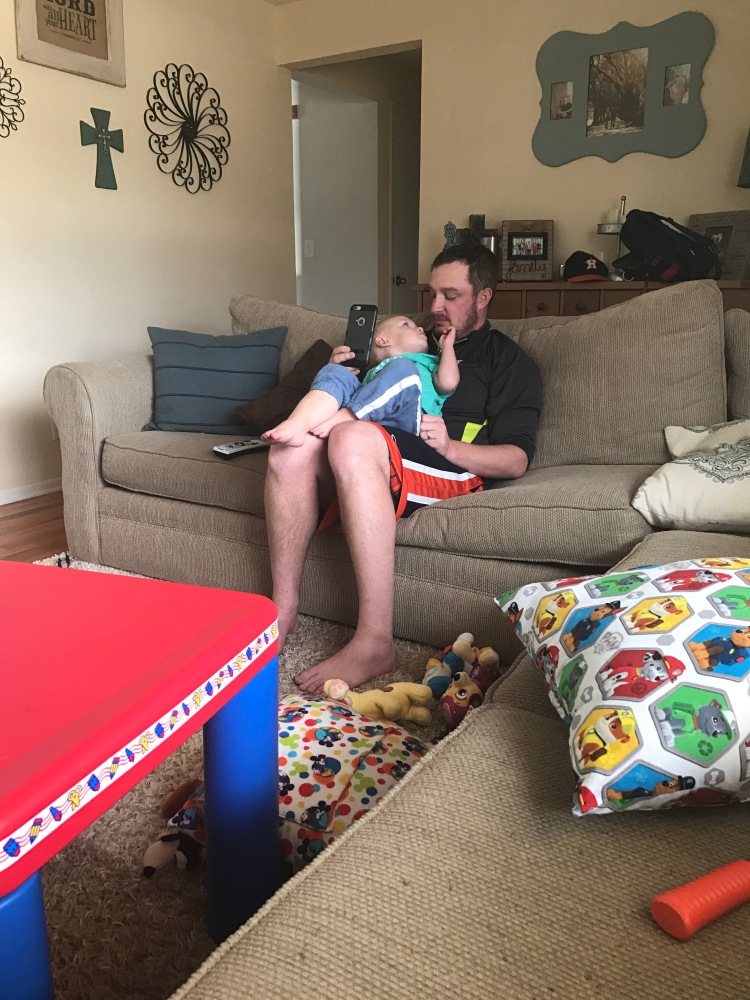 I mean, can you even get enough of these two together? They’re my favorite.

While they snuggle, I eat one of my favorite snacks.

Which instantly gives me a friend in my lap. This kid loves him some food. We then take this opportunity to send silly Snapchat videos. 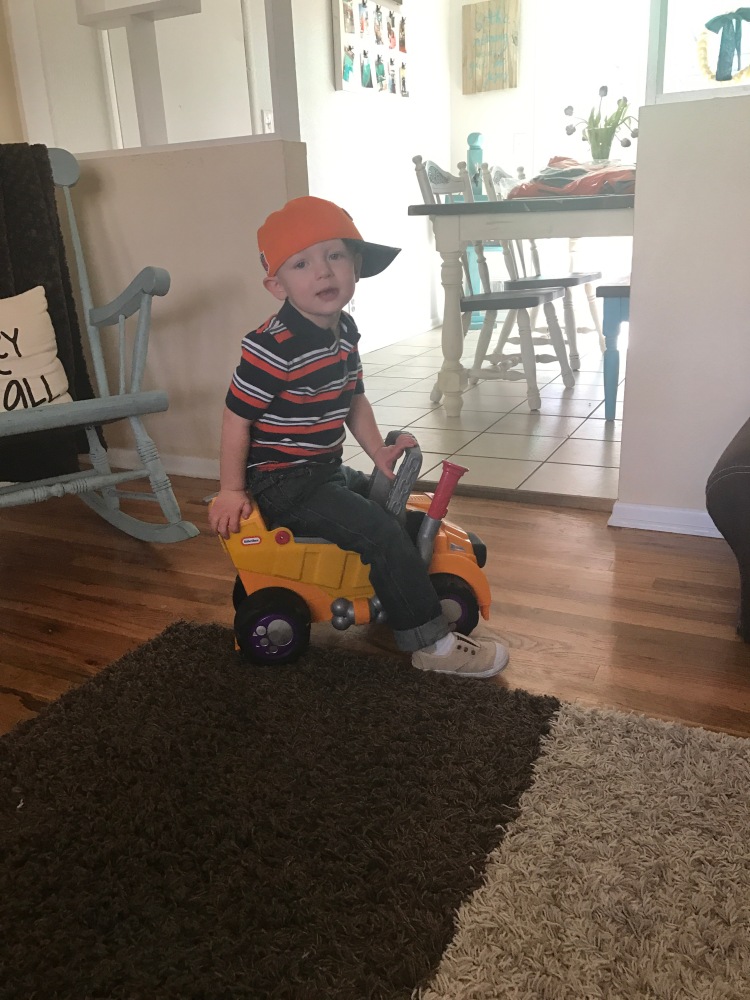 We get the little man dressed and ready to go. He takes a minute to play on his truck (which Nick has named Guy ironically enough).

And we are off! We are headed to JoJo’s school to go visit her classroom and of course her too. She’s an elementary music teacher which means she has LOTS of fun instruments for Caleb to play with. Needless to say, the guy in the backseat is pretty excited! 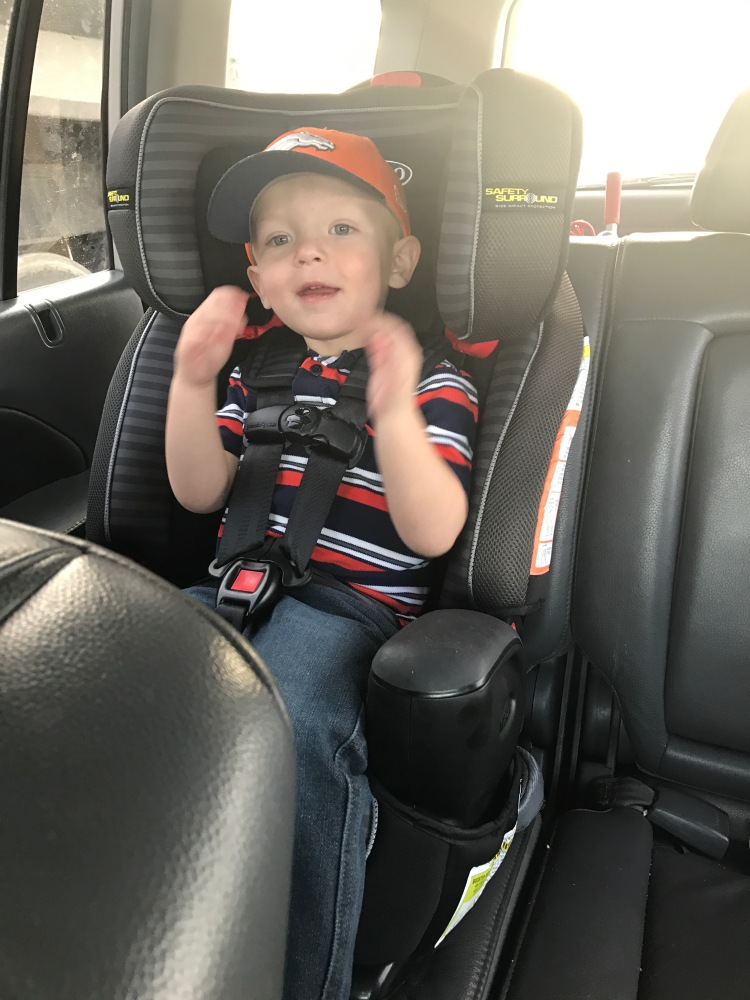 Lots of dancing always happens in the car. 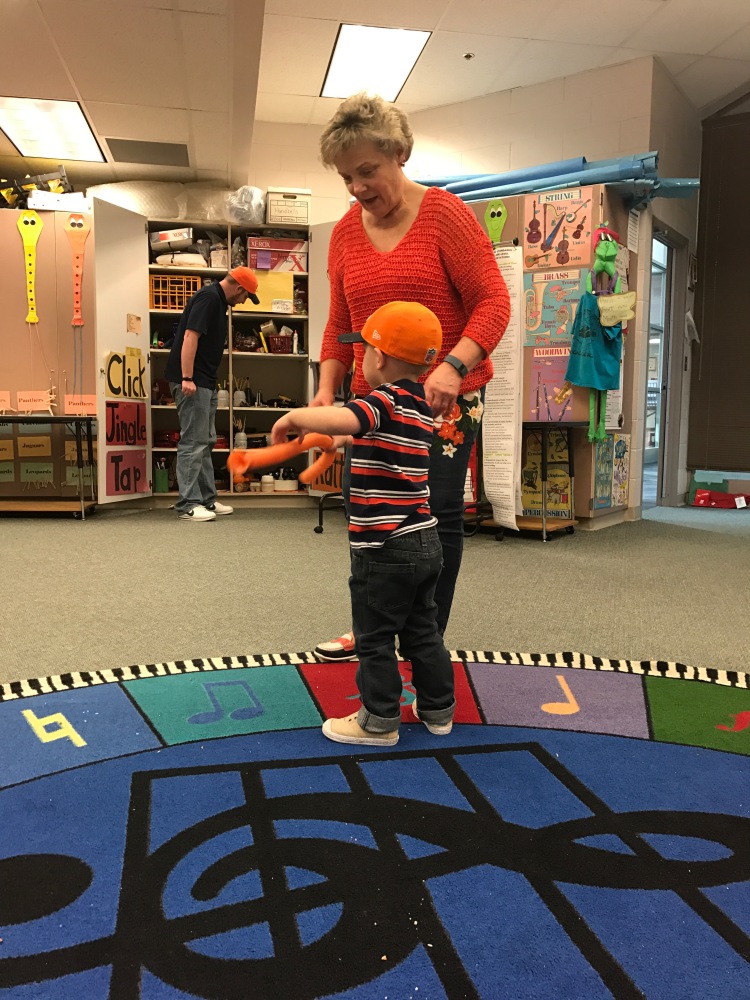 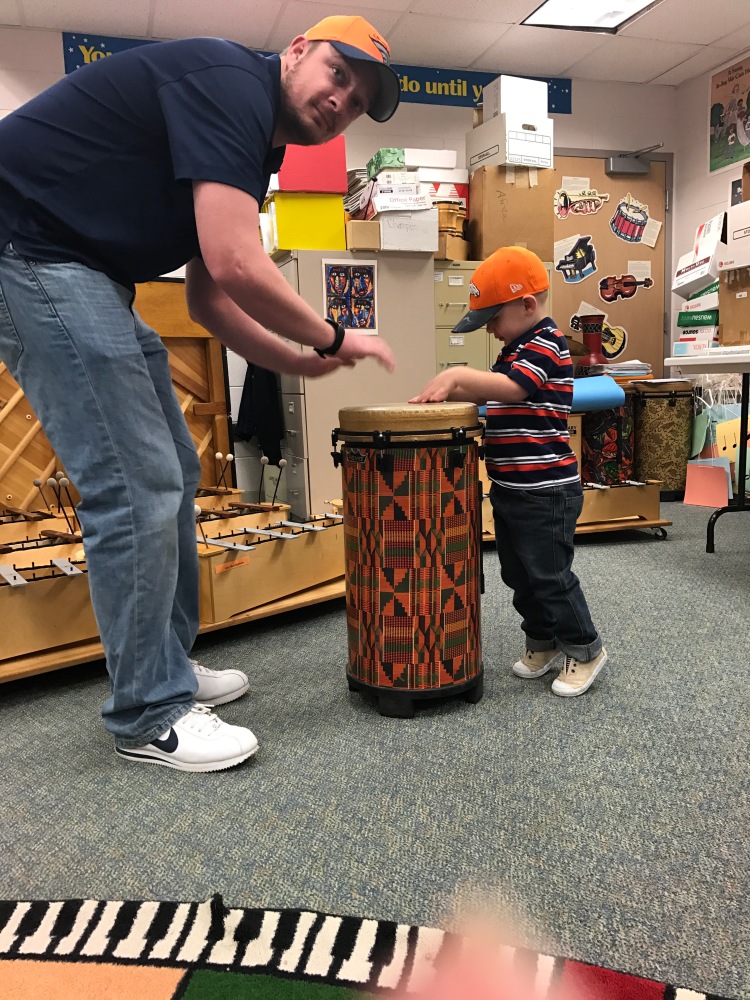 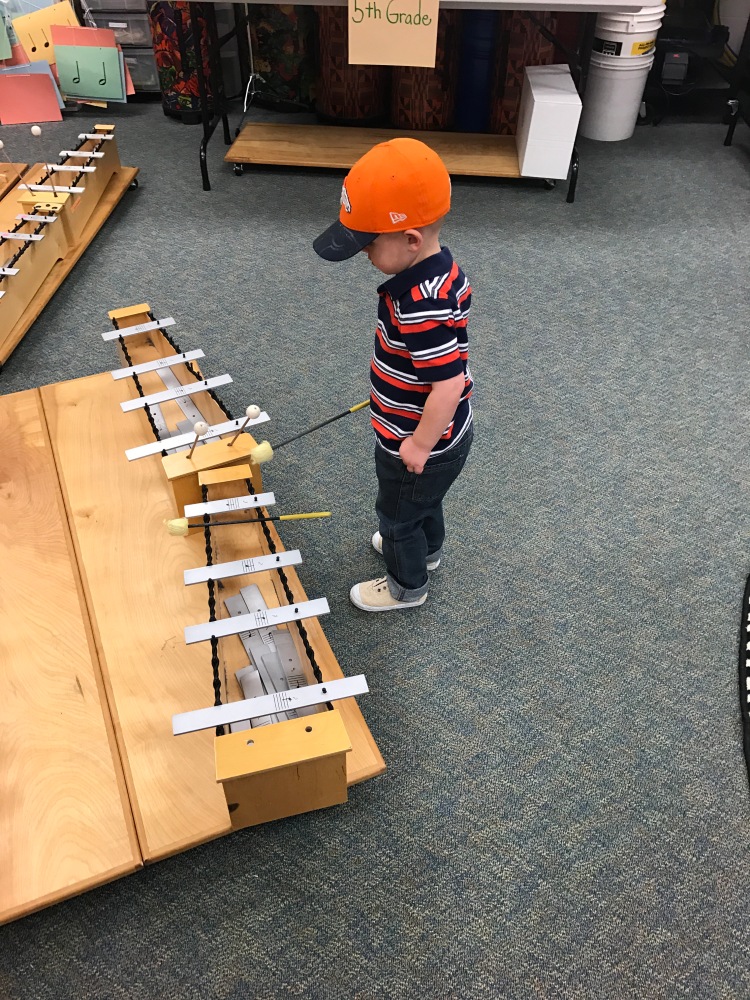 So much fun in JoJo’s classroom! Talk about this kid’s heaven. He LOVES music and JoJo LOVES that he loves music. So it was safe to say they both had a blast. And Nick too.. he was the main reason we had to shut the door because he played all the noisy instruments. 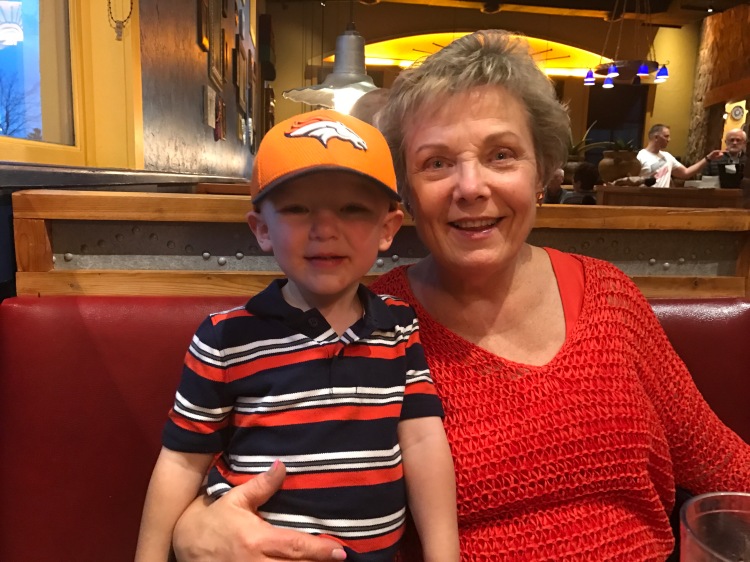 Then it was time for dinner with JoJo at her favorite restaurant, On The Border! Him getting to sit next to his best friend at dinner pretty much made his life. And I was too busy eating all the chips and salsa to document any of the food. We played at JoJo’s house for a little while after dinner and then headed back home…

And it instantly made him be super silly while we were getting our jammies on.

Our bedtime routine now consists of playing with our shadows on the wall. Once he discovered shadows, there was no going back. We play, dance, and laugh with our shadows every night. Obviously we know how to have a good time. 😉 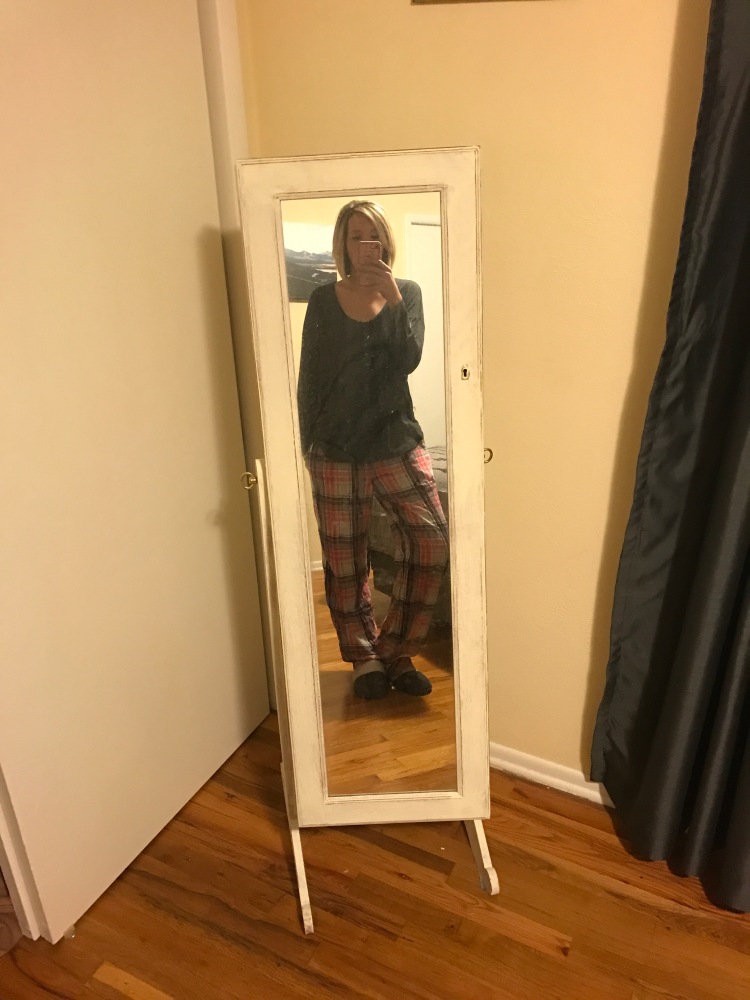 After the little man goes to bed, I immediately put on my own pajamas to get comfy. I have never been a pajama set girl but my mom bought these for Christmas and I’m pretty confident I would live in them if I could. Including the house shoes.

I post my blog that I was working on earlier that day.

Then it’s time to catch up on my DVR. Am I the only one in the land that is still watching this show? It’s so not what it used to be but I just can’t quit a show when I’m in this deep. (I’m looking at you too, Pretty Little Liars.)

My view across the room. Caleb also came home with a gigantic bear named Paddy O’Neill for St Patrick’s Day. Paddy was also enjoying all the drama at the Grey Sloan Memorial Hospital.

After that, it was bedtime for me since I really know how to party on a Friday night. My view of my nightstand now includes my new best friend, my humidifier since we live in dry Colorado. Although I didn’t take a pic of the time, I can pretty much guarantee it was no later than 10:00 pm. Because that’s just how I roll.

And that my friends is a simple day in the life of our family of three! I’m sure the days are coming where Caleb will have no interest in spending his Friday nights with his parents so for now, we are most certainly loving every moment. 🙂