One of the sweetest parts of having Luke enter our family is seeing how much Caleb loves him. Watching him become a big brother has been so precious because he takes it so seriously. He is constantly checking on him, talking about him, playing with him, helping me with what I need for him, and chatting with him. Believe me when I say that Luke always has a 4 year old in his face. I think this picture captures their relationship perfectly…

Luke has no choice but to love the kid. 🙂 Caleb does make him smile big though!

Ever since Luke was born, I’ve been keeping notes of the funny and/or sweet quotes of things that Caleb says. I know these are things that I’ll always want to remember, so I figure why not write a post about it and everyone can enjoy a good laugh! 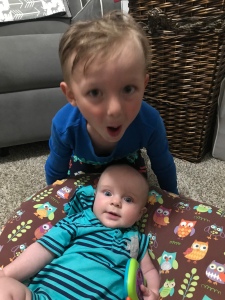 About a week into Luke’s life, Caleb really wanted a big role in helping with him.

Caleb: When can I help you figure out what he needs?

Me: You’re doing a great job already helping me.

Caleb: I’m doing most of the work, aren’t I?

Probably not the best thing to say to a lady who’s sleep deprived and nursing. He’ll learn when he’s a husband. 😉

Around that same time after he was born, Caleb was starting to learn that Luke would just cry sometimes. A couple times he would voice his frustration…

Caleb: Its hard work taking care of a baby. I’ve sang to him twice and gave him his pacifier. And he’s STILL crying.

Caleb: It’s a MYSTERY. He doesn’t tell us what’s wrong – he just cries.

One thing that Caleb finds hilarious?? That you pretty much know anytime that Luke poops since you can hear the noises. Absolutely cracks him up. #boymomlife

Caleb: Because sometimes when you eat, you gotta poop. At least that’s what happens to me.

And apparently he thought we needed an explanation about it all.

Caleb absolutely loves helping with Luke’s bath time. Him & Nick have a whole system of who does what and Caleb takes it very seriously. It finally clicked to him one night that Luke gets a bottle at bed and so now he says often…

Caleb: Man, I wish I got to eat right before bed!

We assured him that he always has dinner and sometimes even dessert and that tastes WAY better than Luke’s bottle.

Obviously being a mama of a 4 year old and a 4 month old, I’ve erred on the tired side the past few months. To which Caleb doesn’t really let me forget…

Caleb: You’re always tired. That’s just how God made you.

Every night before bed, a part of Caleb’s prayer is…

I thank you that we would get good sleep, especially Luke.

Clearly he knows the importance of baby sleep.

Now that Luke has started eating baby food, Caleb is all in on the action. He likes to help pick out what food we should give him, he reminds me of which foods it doesn’t seem like Luke likes, and he loves to watch all the faces Luke will make while eating. One of the cutest things though is that Caleb calls Luke’s bibs aprons.

Caleb: Look, he has a Lightning McQueen apron!

It’s easy to see the confusion there. And kind of too cute to correct.

I’m sure there will be many, many more to come!! Especially since the kid never stops talking. 😉

2 thoughts on “The Caleb Quotes”