Y’all. Today is a big day. Four years ago today, Nick asked me to marry him and I (obviously) said YES. (Well I actually didn’t say anything at first.. I just laughed.. but we’ll get to that part in a minute.) So to celebrate, I thought I would take a trip down memory lane and share how Nick proposed (and because he did such a stinkin fantastic job at it!).

So it was Saturday, December 10, 2011. All I had on the agenda for the day was Nick’s youth Christmas party that evening (he’s a youth pastor just to be clear, not actually a youth). My roommate Katie and I were known to sleep late and lay around and watch TV on our sectional most Saturday’s, but that day she got up, got dressed, and was gone. This honestly should have been my first red flag because we rarely did things without the other AND she rarely got up before me. But oblivion was apparently my friend that day.

Nick came over that morning and brought me Starbucks (such a keeper from the start). We hung out for just a short bit because he said he had to get to church to help decorate for a wedding there that night and that it would take ALL DAY LONG. (Funny side note: It was the wedding of a girl he dated in the past but apparently none of this bothered me at all.. Still doesn’t.. Just funny this was his excuse to avoid me all day.) We said our good-byes and that we would see each other when he picked me up for the Christmas party.

I seriously vegged all day long. Ohhh the single days. It was like the super long get ready for the evening kind of day. Take a shower. Watch a tv show. Blow dry my hair. Watch 10 tv shows. Put my make up on. Look at Facebook. You know those days (or did know them for the mamas out there). It seemed like everyone in my world was busy that day (or just avoiding me, I came to later find out) so it was a very quiet day. And Katie never came home ALL DAY LONG. Weird. But me and oblivion were still hanging out.

All the while, I was apparently being a real stinker at committing to the Christmas party. My sister and brother in law were supposed to come into town for the Cowboys game the next day and she never really gave a time they were getting there. I felt weird about dragging them to my boyfriend’s Christmas party with teenagers I only kind of knew but also felt bad about making them sit in my empty apartment. So somewhere in the world, Nick was freaking out that his plan was all going to come crashing down. Whoops!

Whenever my sister finally told me they were showing up apparently gave me the go-ahead to go to the party. Nick picked me up and the first thing I told him was that I had a headache. I actually don’t remember that part of the story at all but Nick does and it apparently freaked him out even more. Ha! Poor guy. Let me just tell you that homeboy was hanging on by a thread. He was an anxious hot mess. He had been for weeks but I didn’t have a clue what his deal was. But he played it nicely into the story.

As we are driving on our way to the party, he randomly pulls into our Starbucks (our first ‘date’ was there and where we constantly went while dating). He begins to talk a million miles a minute: ‘So I know that I’ve been really weird lately and I’m really sorry so I thought that we could come to our Starbucks. I already called and ordered our drinks and the shutterfly book I made you of us came in and I dropped it off here so I thought we could look at it, drink coffee, and be happy.’

So many red flags. First of all, who calls into Starbucks and orders their drinks beforehand? Famous people? Definitely NOT us. And secondly, he was an absolute freak show the way he said it all. But hey, I went with it. Nick has always been a super thoughtful guy so it didn’t seem too big of a stretch that he would call the baristas to pre-make our drinks (what?!).

We walked in and sure enough, there was a table set up with our drinks (with our names on it) and a book he had made on shutter fly of our dating days. We sat down and he started ZOOMING thru the book with super fast comments (‘oh yeah, look at us there’, etc) but I didn’t see a single page. I was more concerned with the fact that everyone seemed to be STARING at us. I even leaned over and whispered to Nick at one point that everyone seemed to be looking at us. But this still didn’t tip me off because I just kept thinking that if I was sitting in Starbucks and some couple came into a pre-set-up table, I would definitely stare too.

Well we reached the end of the book and at that moment, the barista walked over to our table with a mug with a J on it filled with coffee beans… And sure enough, something REAL sparkly sticking out. FINALLY IT HIT ME. This was happening. I look over to Nick and there he was on bended knee. Neither of us could tell you a thing he he said.. I’m sure it was all very, very sweet.. But at that point everything was a blur. I do know that he ended with ‘Will you marry me?’ Let me just say that when I get nervous, I laugh. And so that’s exactly what Nick got in that moment. I didn’t even realize I hadn’t answered him until he said ‘You’ve got to say something because people are watching.’ Whoops!!! Yes, yes of course! Everyone cheered and out popped my sister and bro-in-law from behind the Starbucks counter. They had videoed and took pictures of the whole thing. SO FUN! 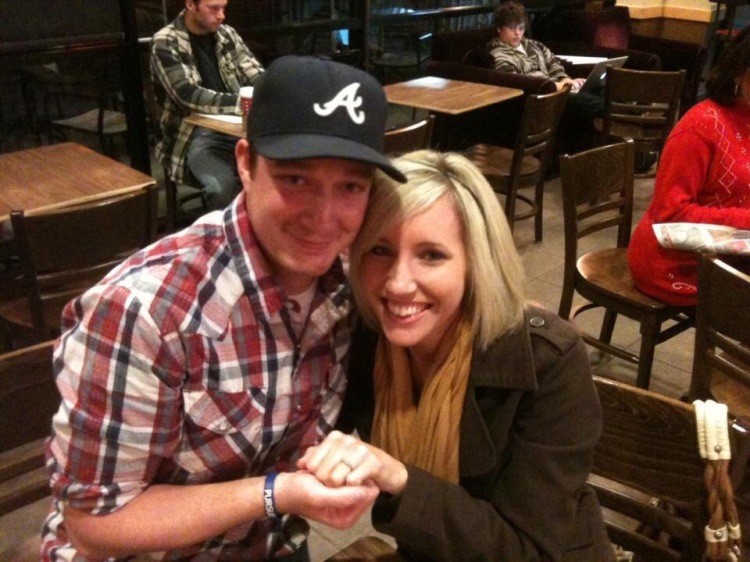 And this is apparently how I announced it to social media (because that’s when you know it’s official).. I still have the coffee mug with the original beans as a decoration in our home! 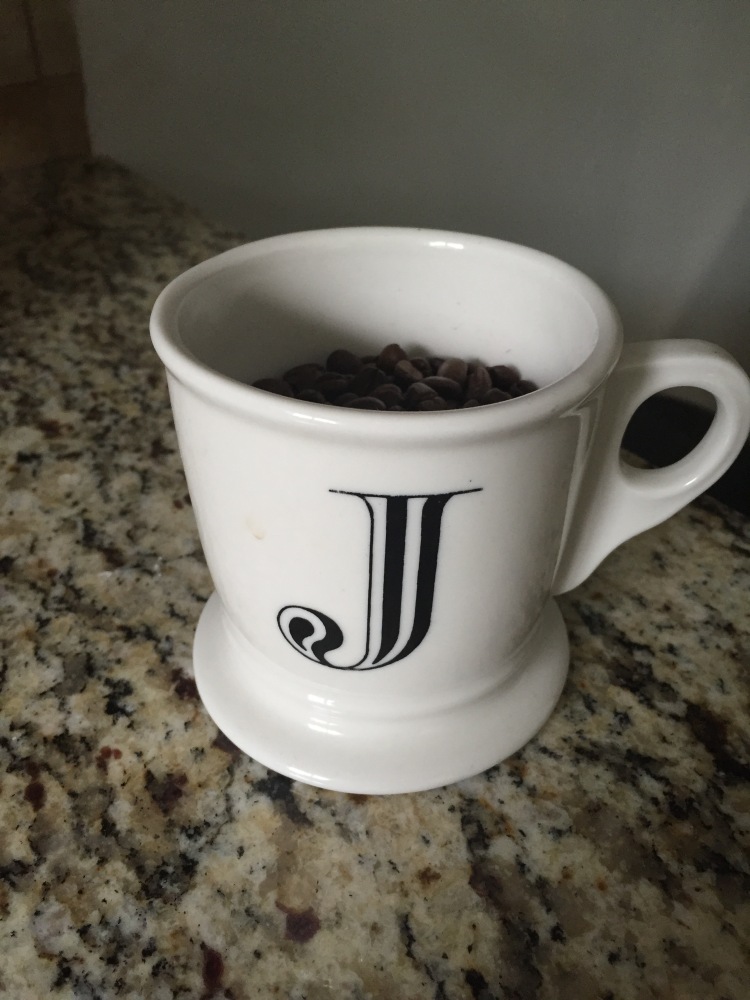 So you know what my next thought was? Oh good, now it will seem normal to bring my sister and bro-in-law to the youth Christmas party since we have just gotten engaged! I am such a weirdo.
So we all piled into the car and headed to where the Christmas party was. We walked in and everyone screamed ‘congratulations!’ ane tons of camera flashes went off. In my mind, I still thought this was the youth group being so excited for us. When I could finally see again after all the flashes, I started to (slowly) recognize that these were MY people, my best friends, my family. It was a surprise engagement party!!! 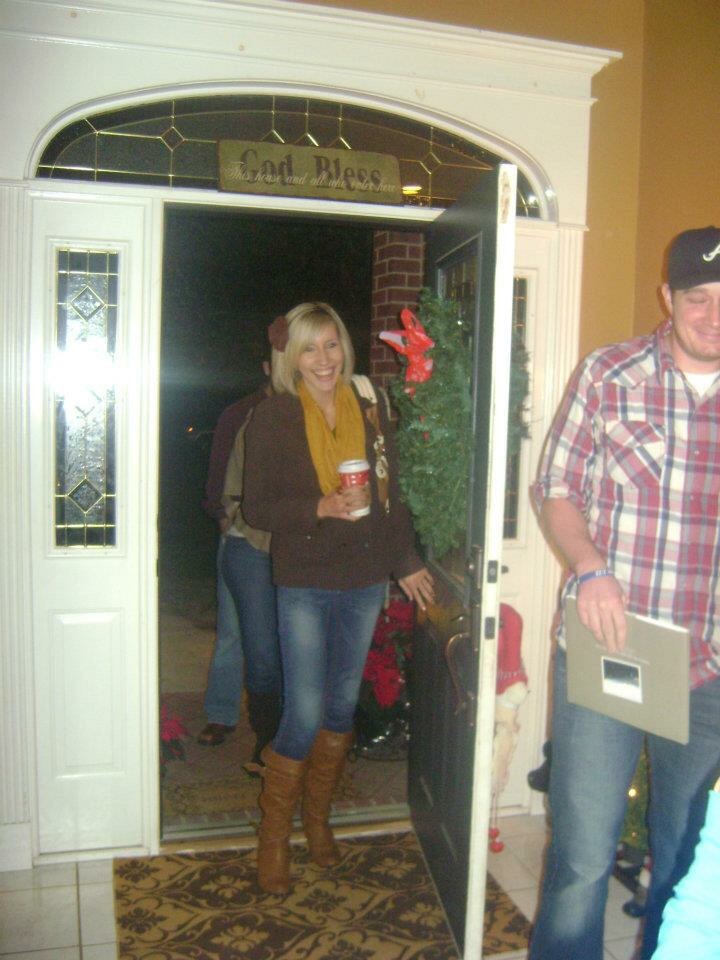 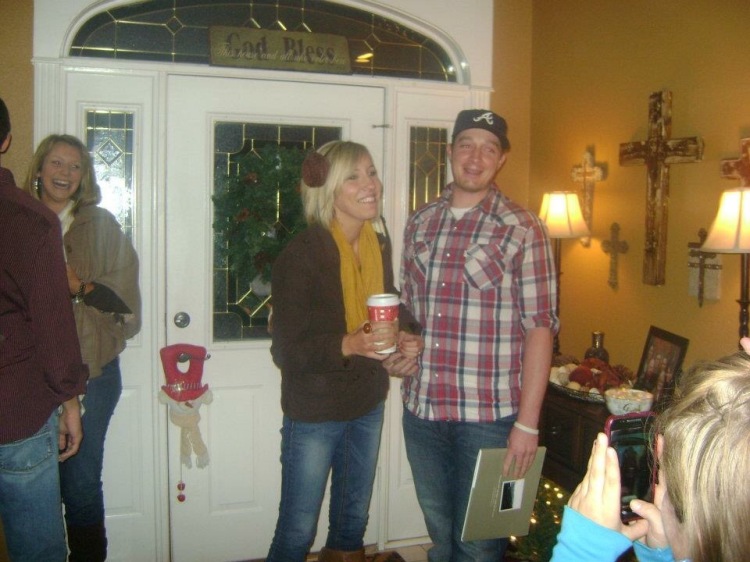 I’ve never been the quickest. Ha! Nick still thinks it’s hilarious that I thought he would propose and then take me to a youth event. I mean, you marry into the ministry, right? I wasn’t mad about it!

Nick’s work wife, Shannon (what I like to call her because she pretty much rocked at keeping him on track) hosted the entire thing for us. The decorations were fantastic and the food was so great. She made the evening SO special for us.

Family pics were a must since Nick was now going to officially be apart of the family! (I’m sure Chris was VERY excited to have another guy.) I even called my mom between Starbucks and the party to tell her I was engaged and she did so great at acting like she had no idea (or that I was about to see her in 10 minutes!). 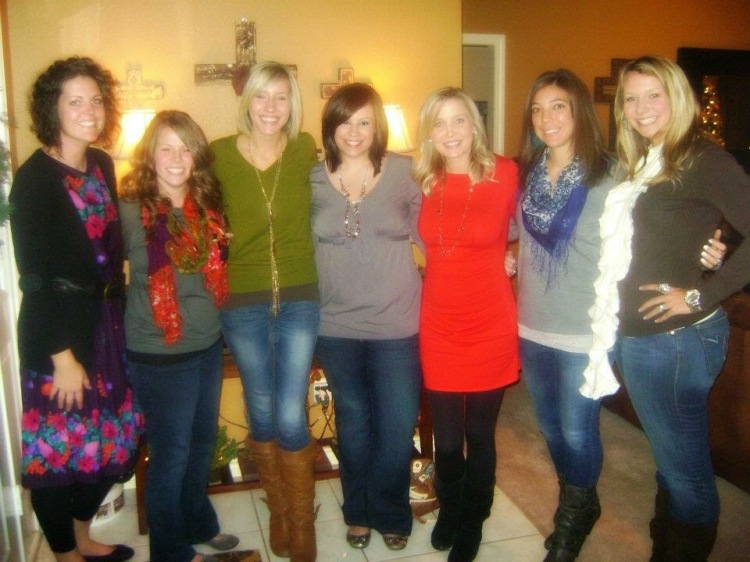 Some of my very best girls were there too! These girls didn’t know it yet but this was totally a bridesmaid picture (just missing 2 girls!).

Look at that happy crazy couple! We were SO excited!!! That night still feels so surreal because Nick did such an amazing job of finding a special way to ask me (because coffee is my love language) and also organizing so many people I love to be there to celebrate with us. (There were other people not pictured that were there too! And my dad and stepmom sent a video because they were on a cruise so that’s a fun memory too.)

I’m pretty sure Nick was so glad it was done because it required so many lies and so much energy to make sure it would all work out and for me to not find out. But it worked out perfectly!!! SUCH a rockstar.

And five and a half months later, we were MARRIED… And we lived happily ever after 🙂