So I get this question a lot, especially since we moved to Colorado. ‘So have you always been a Broncos fan?’ And the answer is NO. In fact I would take it further and say I haven’t even been a football fan in general.

But then Nick came along. And let me just tell you that yes, I knew he was a sports fan when we were dating. I knew that he LOVED baseball. But the football thing totally caught me off guard once we got married. Because yes, the kid hid his love for the Broncos while we were dating. I didn’t have a CLUE how extreme he was (and maybe that’s why he hid it). I still say today that the season of us dating had to be the only time he’s ever missed a Broncos game. (Which apparently he never did thanks to DVR.) He likes to try to help me understand that the first year we were married was also the first year Peyton Manning was a Bronco and that’s the difference. But I also now know how he seems to know every stat in the history of ever of the Broncos so I’m not buying it. The kid bleeds blue and orange. It is to the point that people text me to check how he’s doing when they don’t play so hot. The Super Bowl game against the Seahawks (AKA the game we don’t speak of in our home)? People were blowing me up to say they were praying for the poor guy. The year before that when they lost to the Ravens? Let’s just say that created an awkward time where he didn’t even want to say my name.

The good thing was that I was so indifferent when it came to football and he was just so passionate that it just became easy to root for his team. Not to mention the fact that it was because that’s what was played on our tv every single week and I was constantly being told all of the things that should be known about the Broncos. AND it may have had something to do with the fact that while we lived in Texas, Nick REFUSED to watch a Broncos game with anyone else. You know, just in case someone chose to speak words during the game. So guess who got the privilege to watch all of those games with him? This girl. So by heavy influence, I became a Broncos fan.

AND PEYTON MANNING. He made it so easy to cheer for his team. I watched The Book of Manning about his family and I was sold. I so want him to win every week because he’s just so dang nice. When they lose big games, Nick is so annoyed because I’ve asked more than once if he thought we should pray for Peyton. Because it makes me so sad to think of him being so bummed and discouraged. (Nick seems to think he can be consoled just fine rolling around in his mounds of money.) So when he got hurt and that maybe meant his career was going to end that way, I was SO SAD for him. So when he came back and there was a chance for him to end his career with a Super Bowl win, I was DEFINITELY cheering on the Broncos. (I think Nick may be nervous that I’m not going to love the Broncos as much without Peyton. We’ll cross that bridge when we get there.)

Our little guy has also been born into the love for the Broncos. The kid had an authentic NFL Broncos Peyton Manning jersey the moment he was born.  Here’s his first game.. He was obviously thrilled.

He cares a bit more now. He throws his hands in the air for ‘Touchdown!’ and will fist pump in the air when you shout ‘Go Broncos!’ and is constantly practicing his throw to be the next Peyton. So we are in fact a Broncos family.

So it was a must to celebrate the Super Bowl! 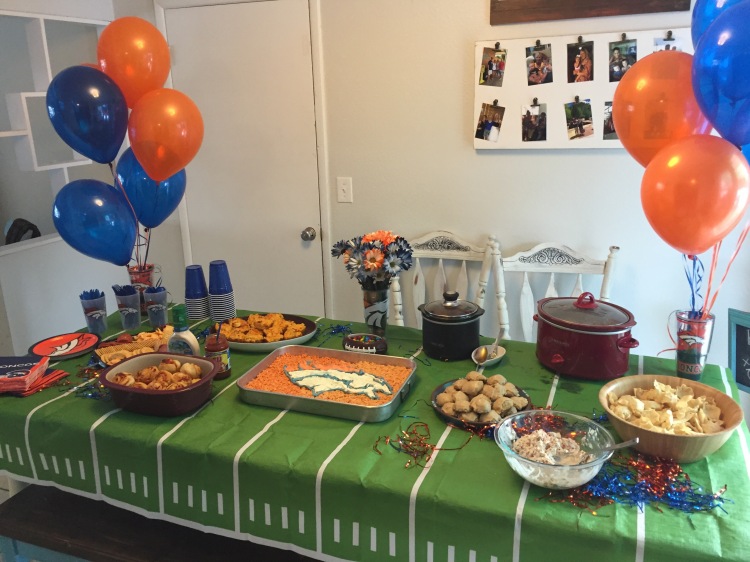 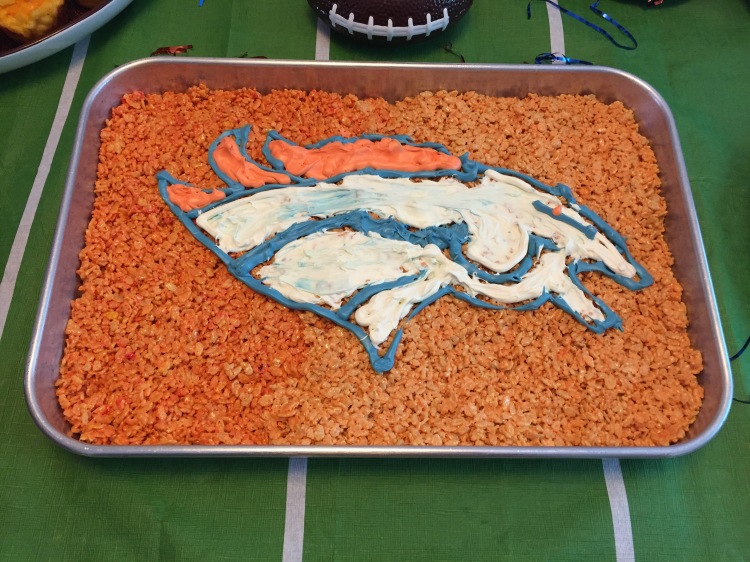 AND THEN THE WIN HAPPENED!!!

Y’all. That is sheer happiness on my husband’s face. Believe me, I know he looks oh so calm right there but that’s just oh so deceiving because there was LOTS OF YELLING. This picture does a much better job at showing the emotion that was occurring in our living room.

YAY FOR BEING SUPER BOWL 50 CHAMPS!!!!! Seriously so excited for Peyton and all the Broncos fans and of course NICK. And for all the superstitious people out there like Nick (who’s made our family wear the same exact outfit for the past 3 games), we did move here the season that they won the Super Bowl. Not saying we are the cause but I’m sure we were somewhat helpful in the whole thing. 😉