These are the days, right?? Older mamas always tell me to relish these days with my little because before you know it, he will be going to prom or graduating from college or living somewhere else with a wife and kids. (I don’t know why these mamas are trying to get me to cry because that’s just not nice.) So a fun series I wanted to link up with today is A Day in The Life with Momfessionals. 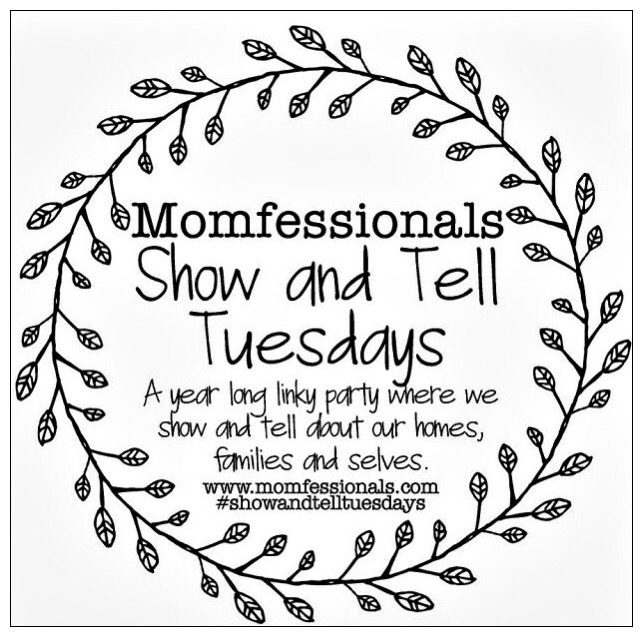 Basically, I choose a day to document my life so that way in years to come (like when Caleb is 17 and has taken his girlfriend to the movies and Nick is sitting 2 rows behind them because I forced him to go keep an eye out), I can read this and remember the simpler times. 🙂 Our days look so different each week day since I work part time so it was hard to choose which one to document, but I ended up deciding Friday since I only work half the day so you can see both parts of my life. So here is a pretty regular Friday in the life of the Jones’… 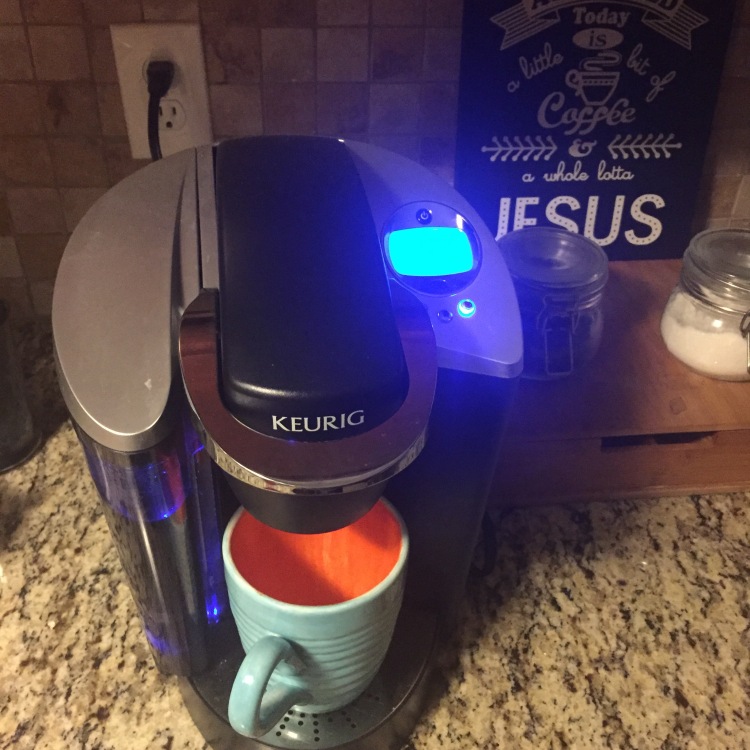 The sun isn’t up, the fam isn’t up.. This is the time where I drink coffee, read, and just be with Jesus. It’s pretty glorious. (Along with my 12 year old sweatpants.)

Took a good morning look at my boy. Absolutely passed out.

I checked up on our impending winter storm warning that had then turned into a winter storm watch. It was supposed to start with rain that evening and turn into snow for the weekend. Happy spring, y’all.

I then got dressed for the day before the boys got up. And just in time… 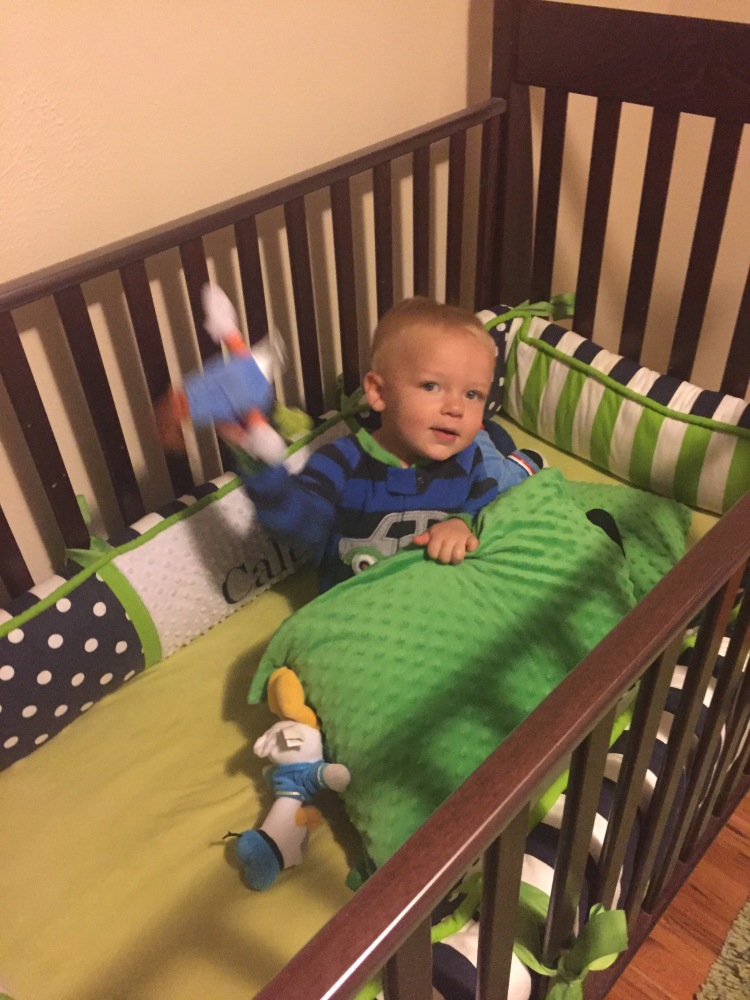 Him and his posse were all accounted for. And the first thing he said was ‘DADA!’ I’m pretty sure it’s his favorite word right now. #notbitter

He then requested a book because he likes to remind me that he is indeed just like me (sometimes). 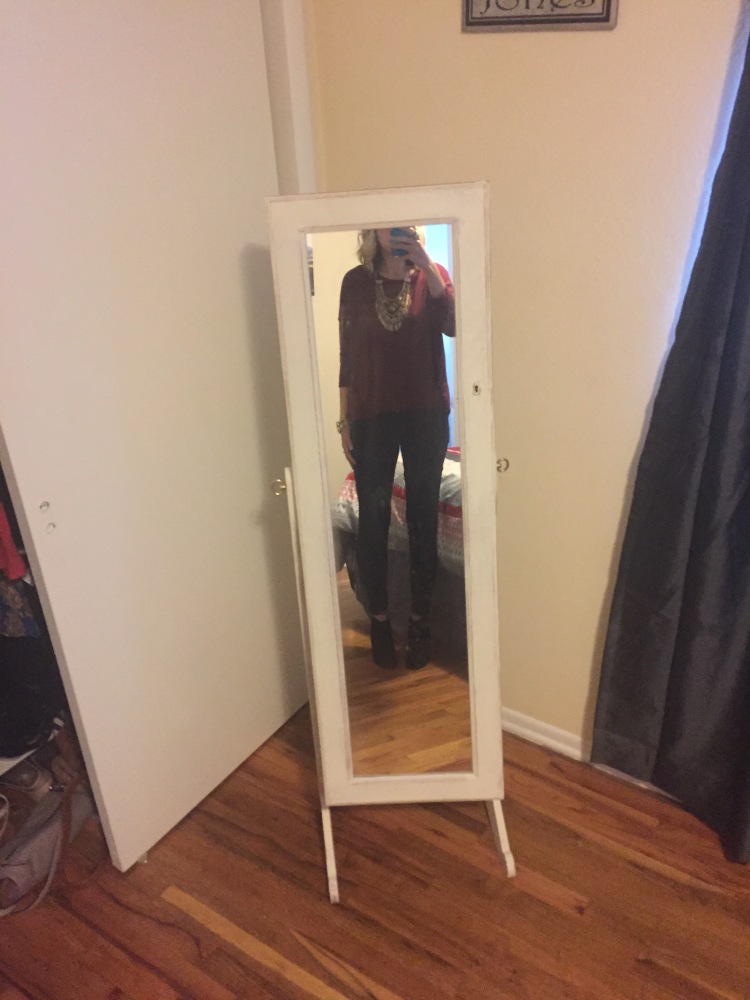 Dressed and ready for work. And my first mirror selfie for the books. (And an awful one at that.) I just kept telling myself it was all for the sake of the blog. #whoami

Breakfast time. I’ve never been great at eating breakfast but this past week I had been attempting to eat healthier and avoid all the snacking that I usually love to do. So eggs it was.

Told this breakfast-stealing (he took most my eggs) cutie bye. I also told his even cuter daddy bye but he requested to not be pictured yet. 😉 Nick’s day off is Friday so they get to spend the morning together when I go to work. I’m pretty sure they both love their boy time.

Good morning mountains! The way my drive to work usually looks is kind of just dependent on my mood. It can be anything from talking to Jesus, listening to music, or talking on the phone. It usually coincides with the time my sister is dropping off my niece at daycare so we’ll usually chat for a few minutes. Now if you know me at all, you know I am NOT a phone talker. Text me all day long but if you call me, I completely freeze. The only people I consistently talk to on the phone is my sister and mom.. And I think it may be because I know with them that at any point I can nicely cut them off and say see ya later if I need to. It’s weird. I know. My friends make fun of me for it all the time. (And yes you read that right.. Even Nick and I just text each other.)

Hello desk. (It is now 8 am, FYI.) The clipboard on the right is from when I did children’s ministry in Fort Worth with the girls that turned into some of my very best friends. When one of the girls left staff, she made these fun clipboards for all the rest of us and wrote us a sweet note on the back. I especially love that I get to use that clipboard again in children’s ministry in Colorado. #CMforever 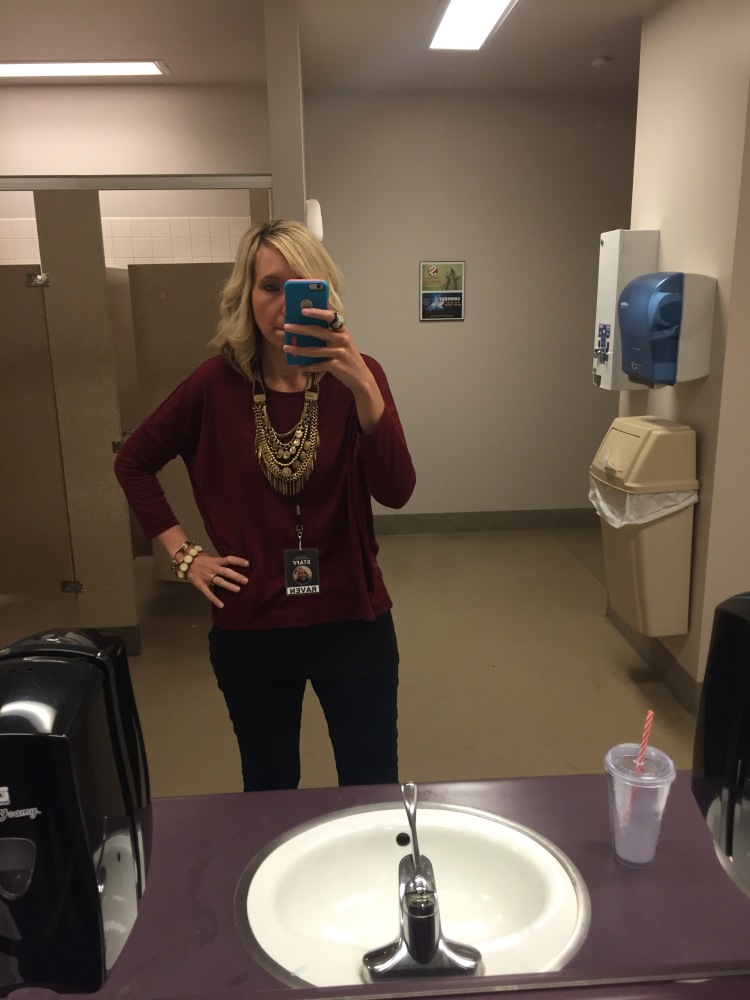 Badge on. When you work around kids, safety first. And another bathroom selfie. #shameful

Time for the second cup of coffee. (Past time if you ask me.) And then off to do all of the work things. I got this notification which means the boys must be at Starbucks. So I of course text that I know exactly where they are. Thank you technology for allowing me to stalk my family.

This means my coffee mug is empty. WAHHH. 😦

I work until noon on Fridays. On this particular Friday, we didn’t really have much going on (which is SO rare) so I decided to run errands after work since Caleb naps until 2 anyways.

First stop.. Target. I just wanted to pick up a few randoms because I had a gift card and who doesn’t love a waltz thru Target childless anyway? 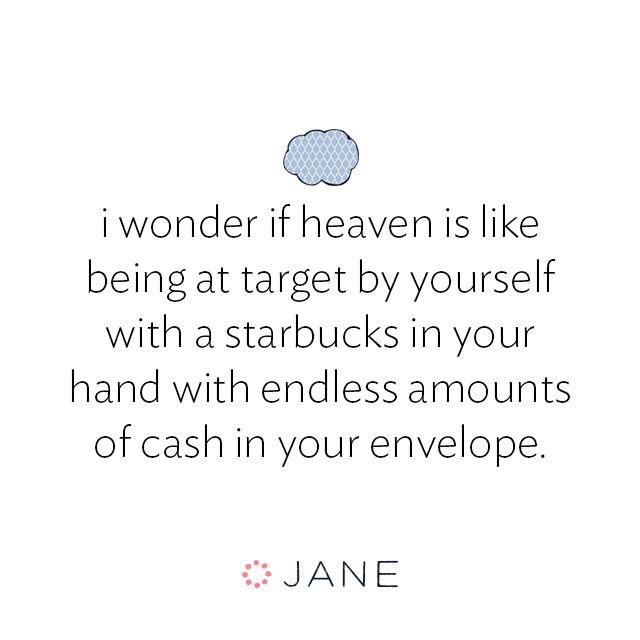 My sister sent me this the other day. Pretty sure my response was add in some peanut butter m&m’s and AMEN.

Next up was getting my eyebrows waxed. (Hence the red.) Now I mentioned the other day that although I’m a girly girl, I’m the worst at all of the girly girl skills which includes plucking my eyebrows. I have really awful allergies and plucking seems to trigger them to completely freak out. So instead of a 30 minute ordeal and allergy attack, I get them waxed when needed and continue to move on with life. A necessary luxury if you will.

Finally home! Here’s what was in the Target bags for those inquiring minds. 😉 I’ve decided to finally make the switch to using Coconut Oil as a make up remover after much convincing from my friend Katie and an extra push from reading Shay’s blog. (And the fact that I had a gift card.. Thanks Dad & Mary!) The rest were just weekend essentials after eating healthy for the week, am I right?! Peanut butter M&M’s for life.

And now it was finally time for lunch around 1:15 pm (definitely later than I usually eat). Yes, that is oatmeal and pretzels. Yes, this has been a lunch choice for me for years and years. Yes, I know that it’s weird and I can feel you judging me.

And look who woke up early at 1:30 because of a loud machine outside. First thing he said? ‘DADA!’ (And this is him staring at Nick’s picture on his shelf. Pretty sure he wins Nick’s biggest fan award.) 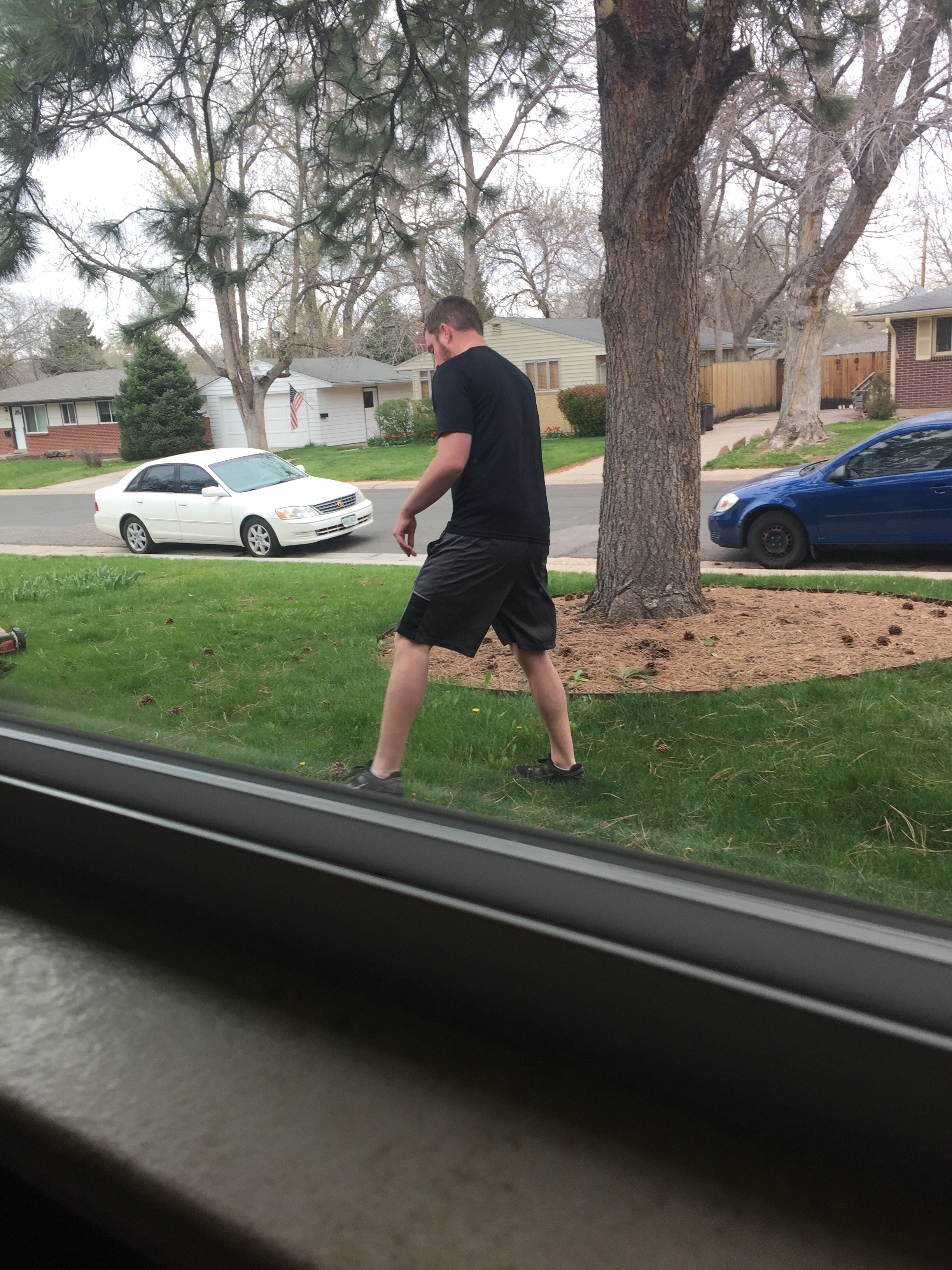 We read some books while Nick did yard work. He had to beat the impending snow storm after all.

It was then time to go back out! It definitely had gotten colder which meant a wardrobe change was in order. A Kohl’s trip was on the agenda. 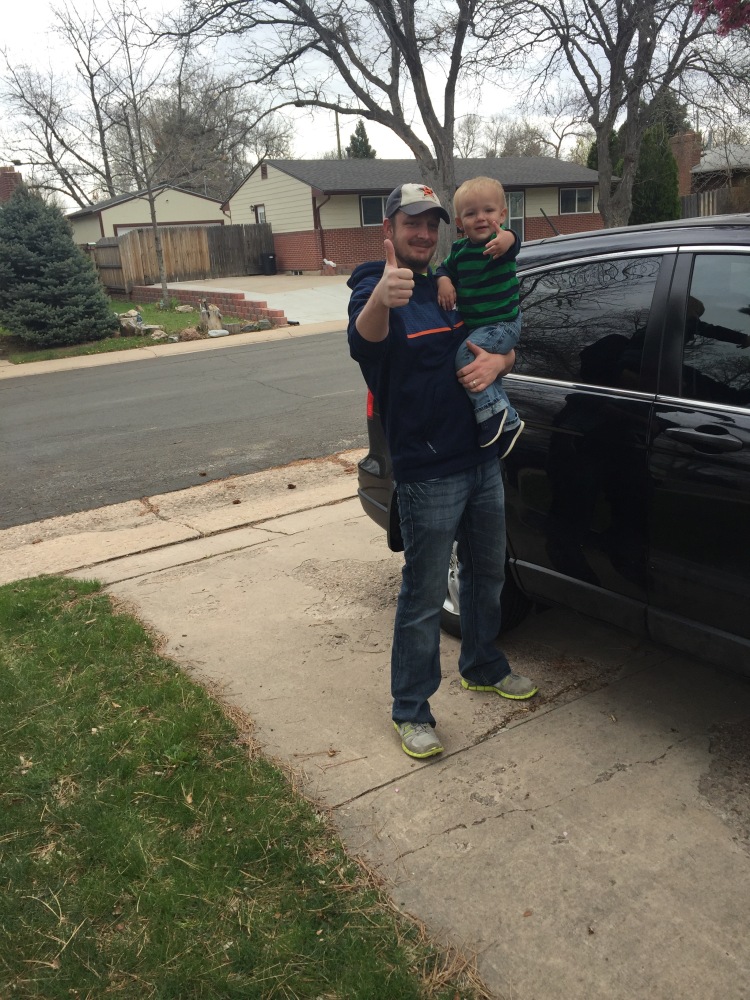 These two sillies were ready!

Me and my coffee were ready..

This is their silly game they play every time Nick puts Caleb in the car. He sets him up there and then pretends to let him slide down and Nick catches him and then they both crack up. Two peas in a pod! 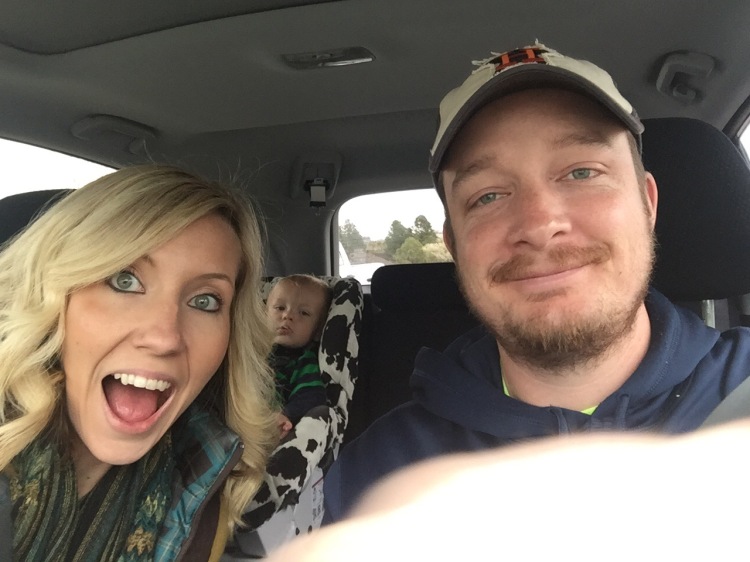 Finally a family pic! Kohl’s here we come. (Can’t you tell the boys are THRILLED about going shopping?!) 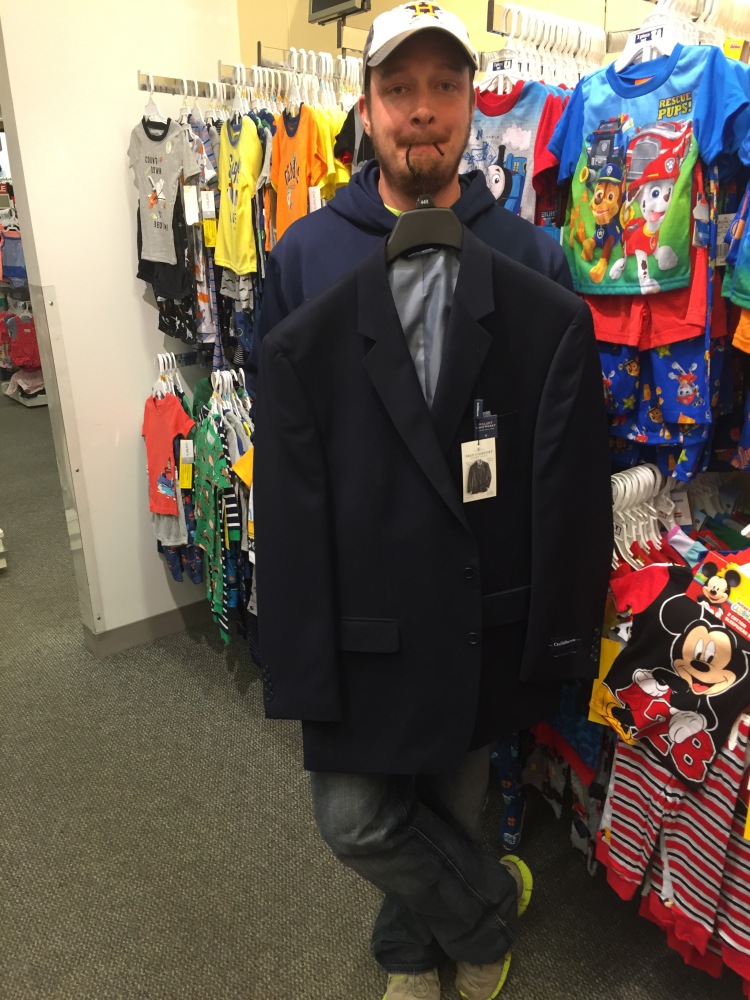 Nick was in dire need of a new sports coat. So if you know Nick even a tiny bit, you know how pumped this makes him. I’m pretty sure he would have rather bought hats with that money. 😉

Caleb couldn’t believe he ran into his BFF at Kohl’s.. And on pajamas no less. We said our hellos and moved on.. 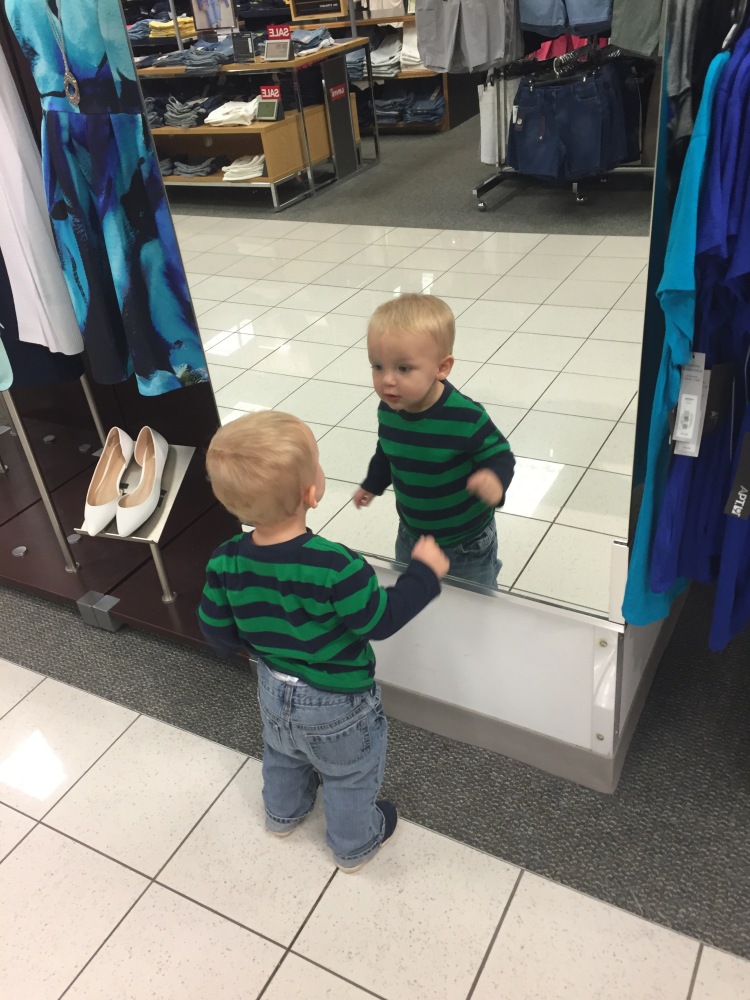 This however could not be stopped. What could be better than a dance party in the mirror?! Might as well dance with yourself if you know you’re a rockin’ dancer! Nick had to finally intervene and get us to the check out line so we could go to dinner. I think he had tapped out on the shopping front. 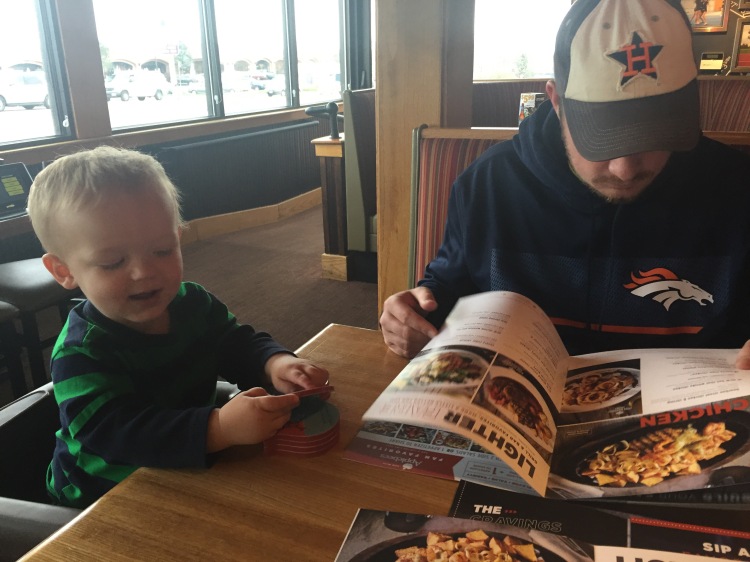 We had received a gift card to Applebee’s for Christmas so we decided it was a good night for it. Neither one of us could remember the last time either of us had been to an Applebee’s so it made for a fun adventure! And Caleb surprised us when he pointed to the apple on his kids menu and said ‘AP-PLE!’ Ummm, what?! Add another word to the list of what he can say. #whoknew

After dinner, we headed home because the rain was starting to fall. Here came our storm!

He pretty much loves to play in rain or snow. He finds it all very hilarious!

He also discovered how to ring the doorbell. Oh boy.

We played in the hallway a little bit before bed. He loves to have us on each end and run back and forth between us.. And especially loves when we yell & scare him when he gets to us. LOTS OF LAUGHING. 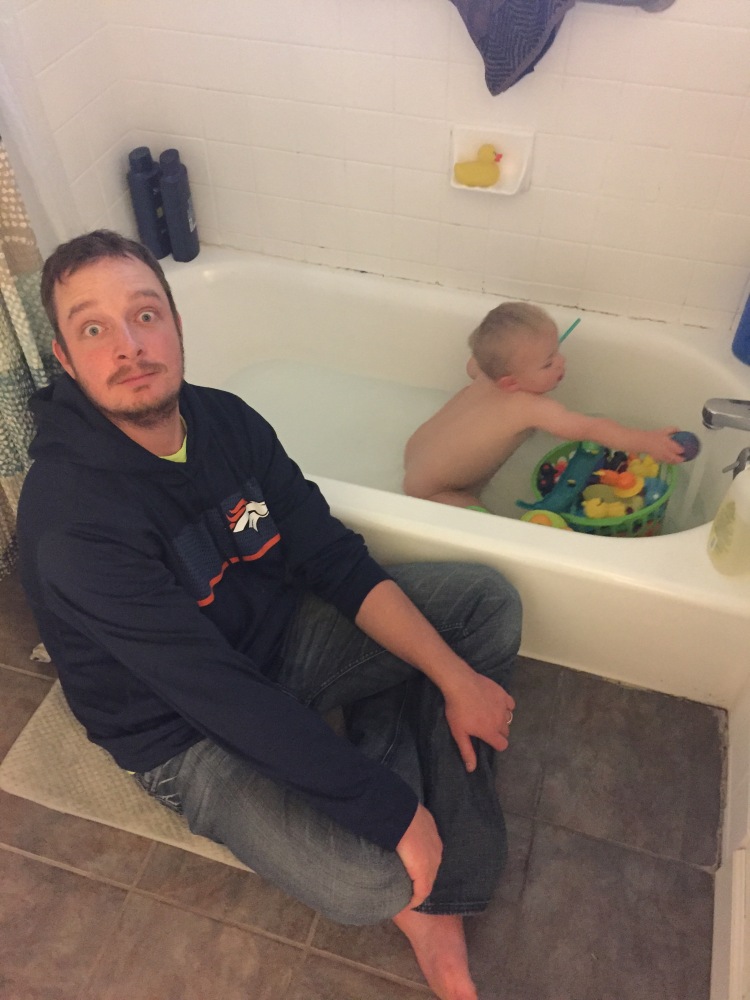 Bath time!!! Nick does Caleb’s bath every night because he is a saint. And they have an absolute blast together playing and splashing and soaking the entire bathroom.

I then towel him off and get him ready for bed. I think we have pretty much kept these jobs from day one. 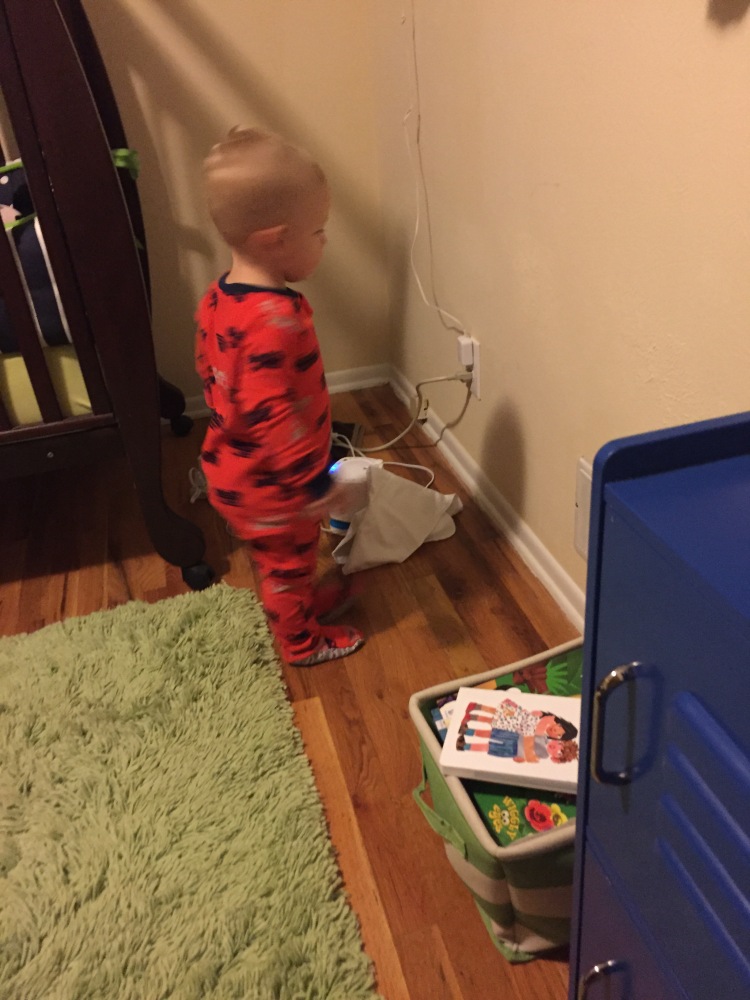 Then it’s bedtime for the little guy. We get him all jammied up and then he turns on his sound machine.

We read a story, say our prayers as a family, and then one of us rocks him for a minute and puts him down. He’s usually passed out by 7:15! Which means if neither Nick or I have anything going on that evening, then we get a whole evening together. Win win!

And Friday night we didn’t so it was time for…

This is the new show we’ve been watching together. We love when we have a show we are binge watching that we both enjoy. Fun fact: We rarely watch movies together because we can never agree on one. But seasons of shows, we somehow can make work.

We were both pretty exhausted so we headed to bed around 9:15 pm. We chatted a little more then I flittered around on my phone while Nick read until I finally called it a day! 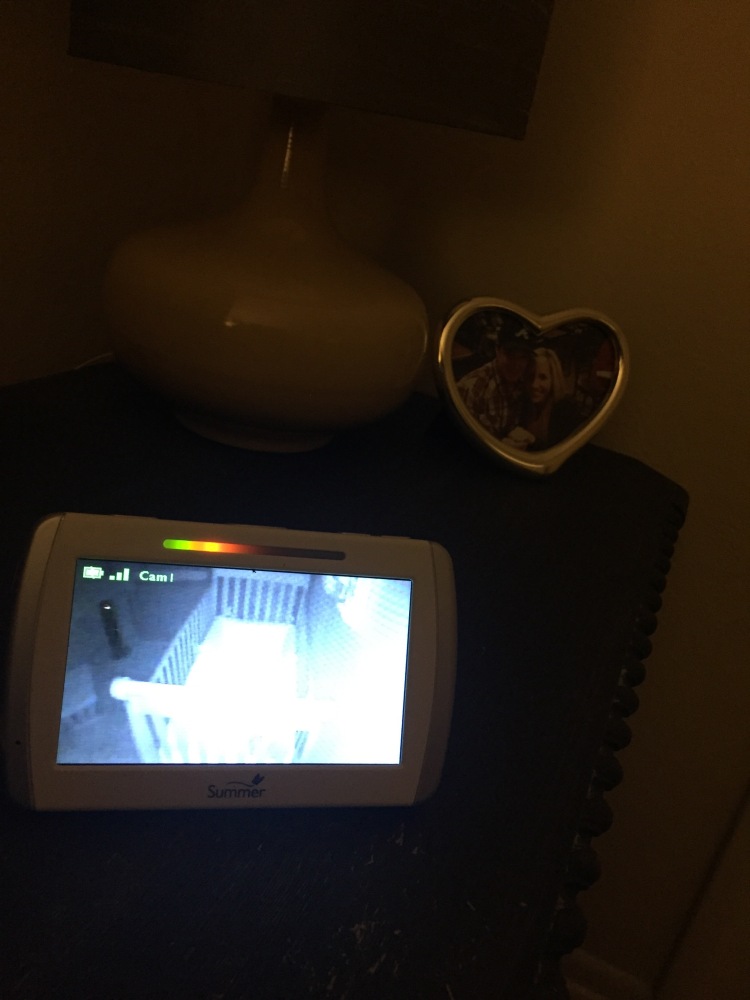 One last glance at the little guy. And that my friends is a pretty normal day in the life of the Jones’.. Hope you enjoyed a peek in. 🙂