So I am officially 24 weeks along which means I’ve passed the halfway mark. Praise the Lord!!! And it also means that we found out the sweet gender of our baby. Now let me give you some background on this. Before I even got pregnant, I always told people that I would gladly be a boy mom forever. As active & crazy as boys can be, that just seems easier to me than the emotions and drama that can come with girls (hello teenage years!). Nick was totally in the same boat. He was happy to stick with what he knew. And he’s a frugal guy so he pretty much was all about the fact that we own boy things. Caleb was the only one in our family that was rooting for a girl!

But then for 20 weeks, people kept saying I was having a girl. And I mean EVERYONE. I think a lot to do with it was they just wanted us to have a girl, but it seemed to be a consensus. Which led me to believe (with no reasoning whatsoever) that it was a girl. As we talked through names, we came up with one for a girl which then sold Nick on the idea of having a girl. So our family had accepted and expected a baby girl to be announced.

I turned 20 weeks while Nick was in Poland so Caleb & I patiently waited for him to return to head to the doctor to see our sweet baby. 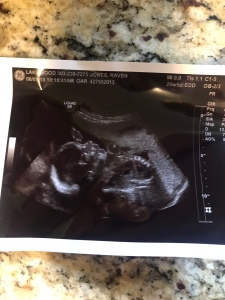 We explained to our ultrasound tech that we wouldn’t be finding the gender out that day, but asked if she would put it in an envelope for us to hand off to friends. And that’s exactly what we did! We handed it right off to two amazing friends that had offered to throw us a gender reveal party that coming Friday night. 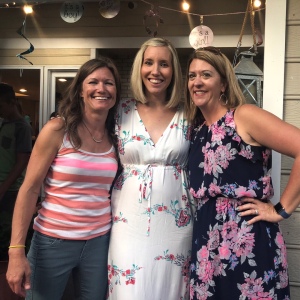 You know how funny it feels to know that someone else knows what you are having but you don’t know?! But again, we patiently waited for Friday to come to find out. (Is anyone picking up that the patiently is clearly sarcastic?)

We took a poll on social media and it seemed even the majority there thought that it would be a girl. So I was fully expecting Friday to be fun but also anti-climactic because we would find out we were having a girl and everyone would exclaim ‘I called it!’ 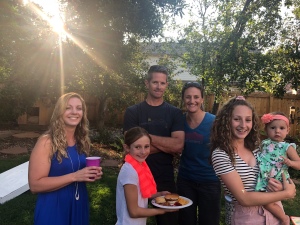 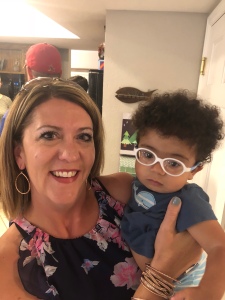 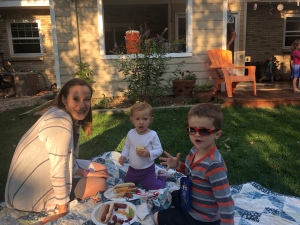 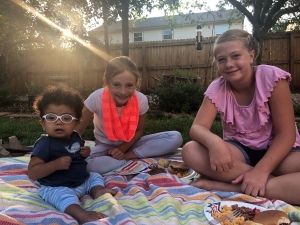 Our people from our small group and children’s ministry staff came to find out what second baby Jones is going to be! We didn’t know how the reveal would go down so they set us up on the porch with everyone in the yard and this happened… 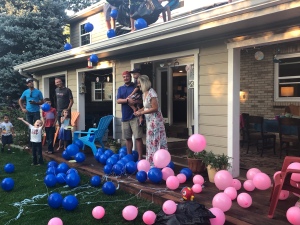 All the kiddos released the balloons down and initially I saw blue balloons & Nick saw girl balloons. And then someone sprayed us with silly string (which apparently wasn’t supposed to happen yet). At that point all I kept saying is ‘It is NOT twins!!!!’ Because pretty sure Nick asked that question every time we went to the doctor to confirm there’s only one baby in there. And let’s just say, if it were twins and I found that out in front of a group of people, I would have needed a moment. Ha! But we didn’t have long to think about it because then this happened…

We were absolutely attacked by blue silly string! All you’re missing from this photo is hearing our child screaming and crying. Clearly he really enjoyed finding out he was having a brother.

So there it is folks… we are officially a boy family!!! Go ahead and buy me all the #boymom gear. 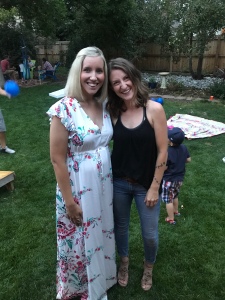 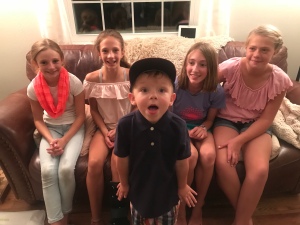 Nick and I were totally shocked. We laugh because we totally succumbed to the power of the people to start believing it was a girl. But we are SO excited to have another little boy!

Also, since so many people have asked, Caleb is beyond excited too. His only reason for wanting a girl is so mommy could have another girl in the family. He sweetly apologized to me that night since I would be the only girl and once I assured him that I was more than okay with it, he’s all for a little brother. He’s already been creating a list of all of the things that he can teach him. Climbing a tree is at the very top of the list, but I’m thinking Caleb should learn first before trying to teach someone else. (Minor details.) 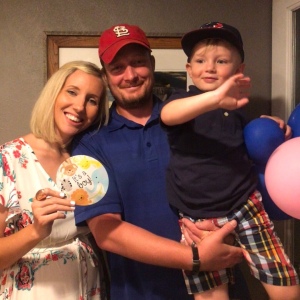 How Far Along: 24 weeks! Moving right along!

Maternity Clothes: Yes and no! I’m still able to wear some of my normal tops & dresses, but officially in maternity shorts & jeans. Also, when my sister & mom were in town, they totally helped me overhaul my closet to make room for all the maternity things. Such life savers or else I would still be squeezing this belly in all my regular clothes…

Sleep: I’ve officially started getting uncomfortable in the night and haven’t slept as well. I usually sleep on my back so the adjustment to my side hasn’t been going very well…

Best Moment Lately: This baby moves a LOT! A couple Sundays ago, Nick preached and the little man moved around like crazy the entire time Nick was up there. So he either really loves his daddy’s voice or else he was just being moved by the Holy Spirit.

Miss Anything: It’s no secret that I love clothes so I definitely miss getting to wear normal clothes. But more than that, I think I miss not being uncomfortable often.

Movement: Yes, see above! This baby loves to move & groove. Makes me a little nervous about his hyper-activity. Especially because my doctor said that the placenta is in front so I may not feel as much movement as there is. Ummm, because I feel the baby a LOT.

Food Cravings: It is all over the place. Nick laughs because he just never knows what’s going to show up in our groceries these days. I’m generally a pretty healthy eater but in the past couple weeks, I’ve consumed a lot of ruffles chips & ranch dip and I’ve also made Nick take me to Panda Express. And I definitely prefer savory over sweet.

Anything Makes You Feel Queasy or Sick: I’m doing better in this department thankfully! Sometimes there are smells that can set me off. Also if I get too hot, I start to feel really sick.

Anything Different This Pregnancy: I’ve gotten way more headaches and back aches. Nick so nicely reminded me that I am 4 years older this time. (Insert eye roll here.)

Have You Started To Show Yet: Most definitely!! I feel like the belly has super popped out these past 2 weeks.

Thanks to all of the congratulations, sweet comments, and prayers that have been coming our way! This baby is already SO loved.