Last year was Caleb’s first year of preschool and he LOVED it. He made good friends, learned so much, and absolutely loved his teachers. His favorite thing? Wee Wiggle. (AKA gym time for preschoolers.) Let’s just say, summer felt long for both of us. The poor guy spent a lot of time up at the church while we worked, but he was a champ about it. But we sure were pumped it was back to school time!!!!

Last year, I asked him some questions as he started preschool because I thought it would be fun to see how his answers would change year to year. And sure enough, it’s funny to see how much he’s changed already!

What is your favorite color? Green!

What is your favorite food? Pizza.

Who is your best friend? Hava, Brooks, Maddie Moo! Dylan too!

What is your favorite thing to play with? My toy monster trucks.

What is your favorite animal? A lion and a tiger.

What is your favorite movie? Sing!

What is your favorite book? Doggy Dog.

What do you want to be when you grow up? A doctor. Actually not a doctor. A fireman!

He loved answering questions and then decided it was time to ask me lots of questions back. Some of his answers totally surprised me, especially the fact that we haven’t watched the movie Sing! in a sweet forever. But you just never know what a 3 year old is gonna say. 😉

One thing that has not changed from last year is ALL. OF. HIS. WORDS. This kiddo loves to talk, talk, talk, and then talk some more. I’m not sure if he knows what silence is. If Nick and I are having a conversation in the car, he either wants to be apart of it or he will try to start a new convo with us just to be included.

One of his favorite things in life right now is wrestling with Daddy. He absolutely cannot get enough. He’s trying to learn the art of trash talk which is pretty hilarious to listen to. The wrestling can get pretty crazy so I’m glad to have no part of that. And it’s crazy to think that one day there will be 3 of them wrestling. So much for nice furniture. 😳

Caleb’s newest thing is being ‘shy.’ This guy is a total extrovert and loves people and wants to go and do something everyday. But although he is still all of those things, when we get somewhere he is suddenly shy and can’t say hi to people. Even if he knows them. Granted he doesn’t do this with family, but pretty much anyone else on the planet. But give him 10-15 minutes (depending on the situation) and then he’s all good. I guess maybe he really is shy and Nick and I should just accept it instead of finding it annoying? #parentingfail 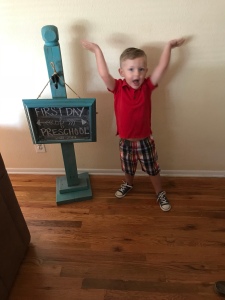 Maybe this is TMI, but this guy is the toot police. You will never catch him tooting without saying ‘excuse me.’ It makes me laugh that this is the one thing we’ve taught him that he has stuck to closer than life. You can hear him playing in the playroom alone and just hear ‘excuse me, excuse me’ which obviously means he must be in there tooting. If anyone around him toots, he immediately says ‘What do you say?’ until they say ‘Excuse me.’ So just a heads up. 😉 I’m so glad that he has manners in this area… I just wish it was as easy for his manners across the board to be so important to him!! 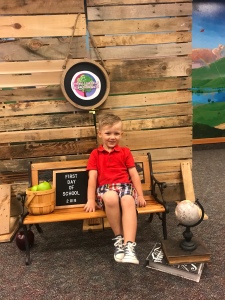 Caleb is still our early riser. He wakes up anywhere between 6:45-7:15 in the morning. We have tried moving his bedtime around and it doesn’t seem to effect him sleeping any later so we have kept his bedtime around 7 (if we don’t have anything going on that evening). Believe me, he has plenty of evenings that he sees 9:00. When we put him to bed around 7, he plays in his bed with all his stuffed animals until around 8 and then passes out. He gets another hour of playtime and we get an extra hour of our evening. Win, win.

This little guy officially loves the copy game. I’m not sure if he does it to anyone besides Nick and I, but he thinks it’s absolutely hilarious to repeat what we say. He also absolutely cracks himself up with his ‘jokes’ that he tells. He will also repeat quotes from shows or movies that he thinks are funny and absolutely die laughing. It’s safe to say that this guy loves to laugh.

Caleb has BIG things going on in his life. Besides starting back at school and that he will turn 4 real soon, we are about to move to a new house so he will be getting a brand new room. Also, he’s preparing big time to be an awesome big brother come December. As much as he loves routine, he is beyond excited about all the new things coming up in his life!

We are so thankful to be this little guy’s parents. As crazy as parenting a 3 year old can make us, we sure do love and adore him. Here’s to another fantastic year of preschool full of new adventures!

2 thoughts on “All About Caleb: Back to Preschool!”