June has already come and gone which means we are already halfway done with summer! How does that happen so fast?! But we packed it in with a lot of things that deserve to be documented.

Caleb played his first t-ball season! It was entertaining watching 4, 5, & 6 year olds play which basically looked like chaos on the field, but Caleb had an absolute blast! It was definitely his jam. (Coaching t-ball to preschoolers is however NOT Nick’s jam.) 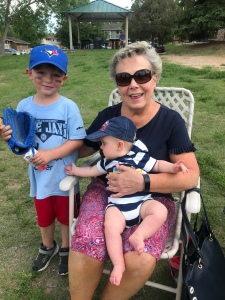 He got to play with his very best buddy and he already can’t wait til next year. These two love them some baseball!

We made sure to be his biggest fan club every week. (His last game in JUNE had us all in jackets and pants because Colorado.) 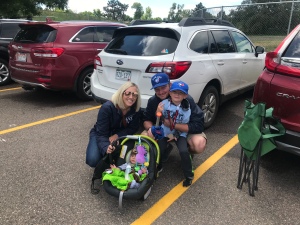 VBS also whizzed right by in a whirlwind! This year’s theme was ROAR! which had us hanging out on an African safari. Nick is still reluctantly our funny character on the stage which Caleb LOVES. I say it every year but the family that VBS’s together stays together. One of the best parts of both working in ministry is when our whole family gets to be apart of it together. Makes all the long days worth it. 😉 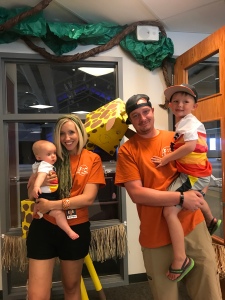 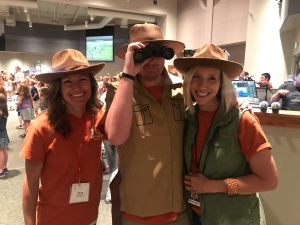 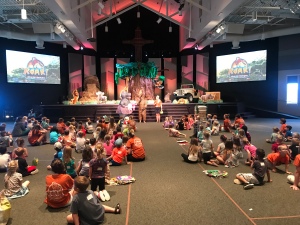 Another huge thing we did in June was paint the outside of our house! Unfortunately we painted it the WRONG color.

And it was our fault so we definitely paid to learn that lesson. So then we painted it again! I’ve never been so happy to see the right shade of blue.

June is my birthday month so my friend Bri and I had another murder mystery party to celebrate our birthdays again! This year we did a roaring 20’s theme and it was SO fun.

I love that we have such a fun group of friends that enjoy dressing up like mobsters and flappers and being ridiculous! I even ended up being the murderer this year. Whoops.

Nick took the youth group to Estes Park for Student Life Camp so I took the boys up to join them for a night. It is never easy to pack up the kiddos and join the student ministry for events or things like camp but I definitely feel like it’s worth the effort for our family to be apart of Nick’s ministry. Before we had kiddos, I played a way more active role by always going to camp and doing all of the things. Although I can’t really do that anymore, I want the boys to see the importance of Nick’s job by being able to witness the students learning about Jesus. Ministry is a vital part of our family and I want the boys to be apart of that.

Caleb has been coming to camp with me since the womb so he was excited for it to be Lukey Bear’s first time.

Caleb did end up getting altitude sickness which meant getting sick in a hotel room in the middle of the night while also sharing a room with a baby. It was pretty much a mom’s nightmare come to life but we survived. Like I said, it’s never easy. Ha! Thankfully he was feeling better in the morning but we definitely headed home earlier than planned.

When Nick got home that Friday, we celebrated my birthday as a family since Caleb was so devastated that he didn’t get invited to my birthday party. Luke had his first ‘pool’ experience and loved it.

One of our favorite things to do this summer is walk over to the park in the evenings and play ‘basketball’ together. I sure do love my boys.

That weekend we met up with our small group where they were camping. There was a huge lake so lots of fun things happening with kids everywhere. Lukey Bear enjoyed all of the people watching. 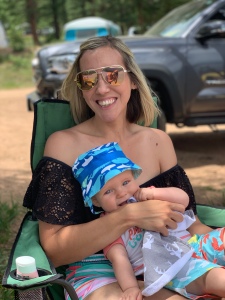 And that brings us to July which seemed like we already packed a ton in just the first week! Summer is always a busy time in our fam but we’ve been having a blast. Big trips are on the horizon so we are soaking in some time at home before that happens.

Now back outside to the sunshine!

One thought on “The Days of June”